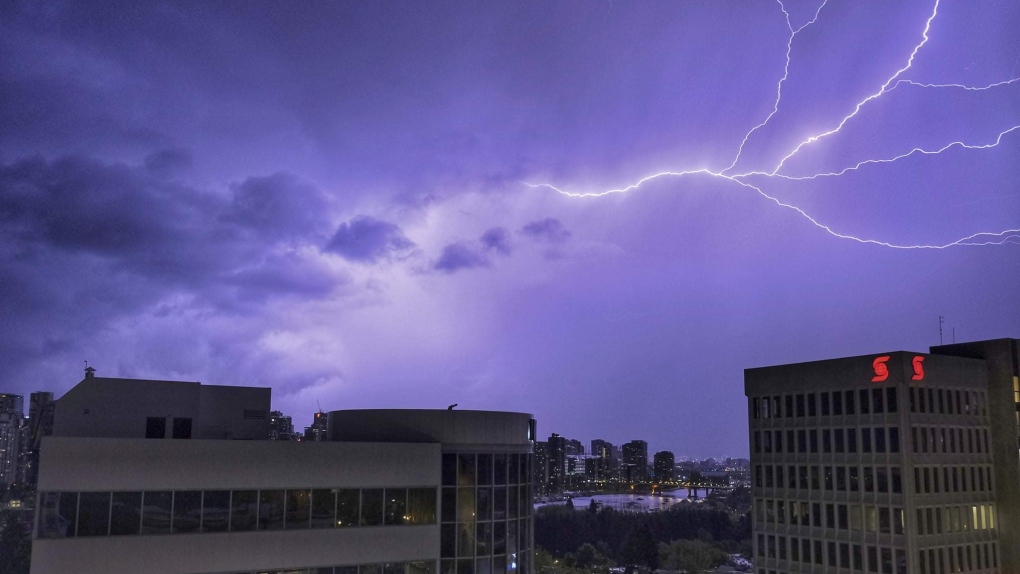 Lightning is seen over Metro Vancouver on Monday, May 17, 2021. (Provided by Charles Lamoureux)

VANCOUVER -- Metro Vancouver residents could be in for late-spring thunderstorms in the next couple days as the weather transitions from rain to sun.

Environment Canada's forecast for the region predicts a chance of thunderstorms starting Monday afternoon and continuing through Tuesday afternoon. Temperatures are expected to reach no higher than 18 C and there's a 60 per cent chance of showers.

In some parts of the province, the risk of thunderstorms was enough to lead to an alert from Environment Canada.

"Conditions today and tonight are favourable for the development of severe thunderstorms that may be capable of producing strong wind gusts, hail and heavy rain," Environment Canada's notice says.

The severe thunderstorm alert is in place for:

Once the storms pass, many areas of B.C. including Metro Vancouver could see several days of sun just before summer officially arrives. Wednesday through Sunday are expected to be sunny, with temperatures reaching up to 23 C.

Then, early in June, a bout of warm weather saw 14 weather records broken in a single day across the province. A summary from Environment Canada showed some of those records dated back as far as the 1920s. In Metro Vancouver, the mercury got as high as 28 C on June 2.

But after those warm days, temperatures dropped dramatically in Metro Vancouver.

For several days, temperatures reached no higher than 18 C and dipped as low as 6 C on June 8, which was the lowest temperature on Environment Canada's record for that day in the past eight years.