The right to fish 'does not exist,' Ottawa argues, but B.C. court rules class action lawsuit over geoduck clams can go ahead 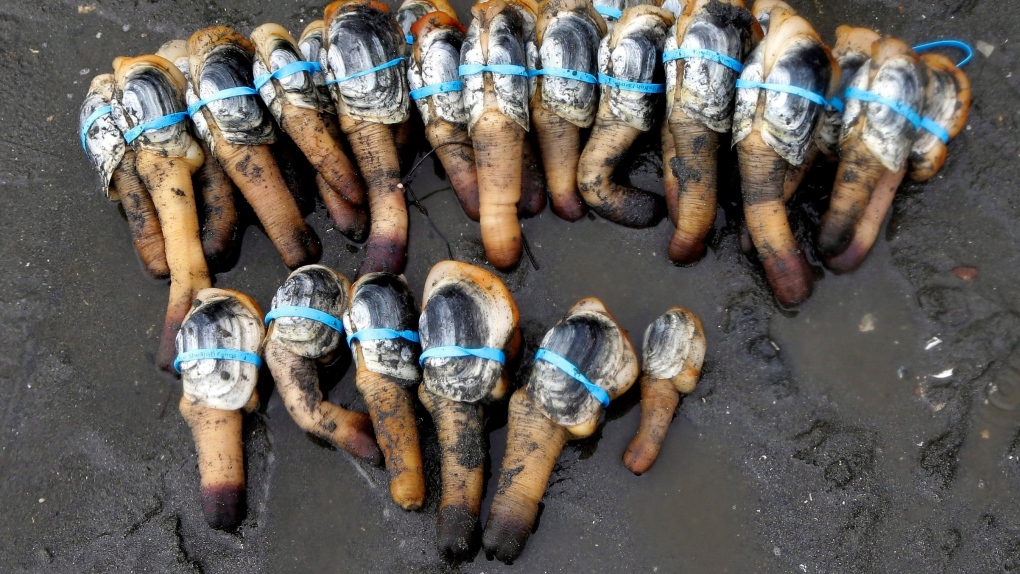 In this March 23, 2015 photo, geoducks grown for for Taylor Shellfish Farms are shown with blue bands around them and ready for transport to a packaging facility near Harstine Island, Wash. (AP / Ted S. Warren)

A class action suit against the federal government can go ahead, despite Ottawa's claims that the right to fish "does not exist," a B.C. judge has ruled.

In a judgment issued last week and recently posted online, Justice Simon R. Coval was asked whether a lawsuit involving the harvesting of a bizarre-looking mollusk could go ahead, a suit the government claims is "bound to fail."

The issue involves 15 areas off the southern end of Haida Gwaii. Until 2019, these areas were used for commercial fishery of geoduck clams, but, in an attempt to protect a sensitive ecosystem, the government has since expropriated the area.

Those spots are now strictly protected.

Those behind the claim – James Austin, Darrell Thomas and two companies called Hideaway II Ventures Ltd. and Front Line Diving Ltd. – say they aren't challenging the government's right to protect such areas, but they're seeking compensation for future income loss if they can no longer harvest geoducks from those spots.

On their side, the class action lawsuit is an attempt to get back some of the money they say they would have earned through fishing the property.

On the federal government's side, the legal battle is a fight over a made-up right.

In his summary, Coval wrote that Ottawa argues "the claim seeks compensation for loss of an alleged right – the right to fish – that does not exist, and is a variation on a theme that has repeatedly failed in our courts."

It was not up to the B.C. judge to determine any compensation, but to look at whether the suit had enough merit to actually go to court.

Further details of what the judge looked at before making his decision can be read in his judgment, but ultimately Justice Coval decided the plaintiffs made enough of a case that they met the certification test.

This test for class action lawsuits includes the criteria that the claim raises common issues, and that the proceeding would be the preferable procedure to come to a fair and efficient resolution.

Geoducks (pronounced gooey-ducks) are a large species of clam that, when matured, resembles an elephant trunk sticking out of a large clamshell, Coval described.

Harvesting the species is complicated, and for reasons of conservation, commercial fishing is limited to 55 vessel-based licences and 550 quota blocks issued by Fisheries and Oceans Canada.

Participation in the program is expensive, Coval wrote. He said most licence holders have at least 10 quota blocks, and that the blocks cost $800,000 each, in addition to the $250,000 licence.

Equipment required for fishing and diving can cost as much as $1 million.

NEW | Nearly 60 per cent of Canadians find it difficult to feed their families, poll finds

A new poll has found that nearly 60 per cent of Canadians are having a hard time providing enough food for their families.

Meat Loaf, 'Bat out of Hell' rock superstar, dies at 74

Meat Loaf, the heavyweight rock superstar loved by millions for his 'Bat Out of Hell' album and for such theatrical, dark-hearted anthems as 'Paradise by the Dashboard Light,' 'Two Out of Three Ain't Bad,' and 'I'd Do Anything for Love (But I Won't Do That),' has died.

Turmoil and confusion over whether truckers would remain exempt from the vaccine mandate last week stemmed from bureaucrats misinterpreting policy in more than one federal agency, including the one that co-ordinates Canada's response to the COVID-19 pandemic, according to Canadian Press sources.

Across Canada a blend of optimism and caution is emerging as provinces and territories revise their strategies for riding out the latest wave of the pandemic.

A rookie cop attended a different type of emergency Monday after running toward the sound of screaming in a parking lot.

As he starts his second term as UN secretary-general, Antonio Guterres said Thursday the world is worse in many ways than it was five years ago because of the COVID-19 pandemic, the climate crisis and geopolitical tensions that have sparked conflicts everywhere -- but unlike U.S. President Joe Biden he thinks Russia will not invade Ukraine.