Suspected case of measles detected at another B.C. school 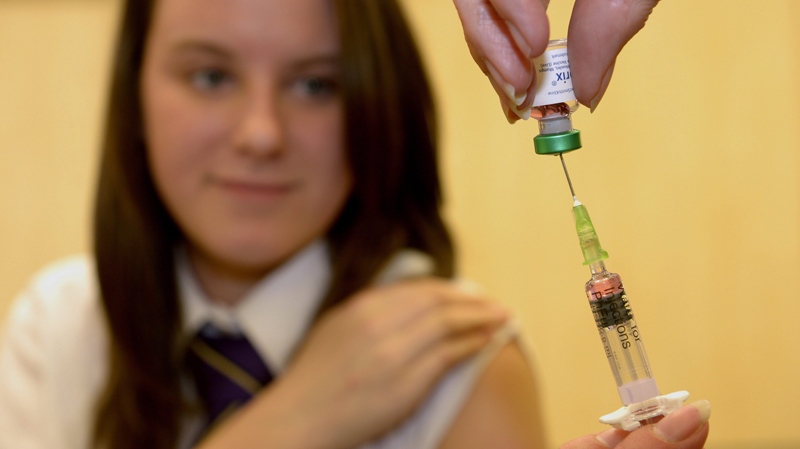 Lucy Butler,15, getting ready to have her measles jab at All Saints School in Ingleby Barwick, Teesside, England. (AP /Owen Humphreys)

Another post-secondary institute is reporting a suspected case of the measles, as the virus continues to make its way through B.C.’s Fraser Valley and Lower Mainland.

The University of the Fraser Valley posted a notice online on Thursday warning students they may have been exposed to the virus if they were on campus on March 13th or 14th.

Health officials are now checking on up to 100 possible cases of the virus throughout the Eastern Fraser Valley.

“We believe that it’s partially because individuals who we asked to isolate and stay at home are not following our recommendations and are out and about in the community,” said Dr. Lisa Mu, a medical health officer with the Fraser Health Authority.

Symptoms of measles include fever, cough, runny nose, and red and inflamed eyes, followed by a rash three to seven days later. Children under the age of five are the most susceptible to the virus.

Students at the British Columbia Institute of Technology, in Burnaby, were exposed to measles two weeks ago with one student diagnosed with the illness.

As a precaution, BCIT restricted access to the J.W. Inglis building, where students had been exposed to the virus. Only students who had received a measles vaccine, or already had a case of the virus or were over the age of 34, were allowed to access the building.

The outbreak has been traced back to Mount Cheam, a Christian school in Chilliwack, where two unimmunized children contracted the virus. The region has historically had a low-immunization rate due to religious beliefs.

“Unfortunately we also do have to fight some of the messages on the internet which talk about harms associated with immunization. They are not based in science," said Dr. Patricia Daly, vice president of Public Health with Vancouver Coastal Health.

To help concerned citizens, the Fraser Health Authority has been operating several vaccination clinics this week and will look to add more in the coming days.