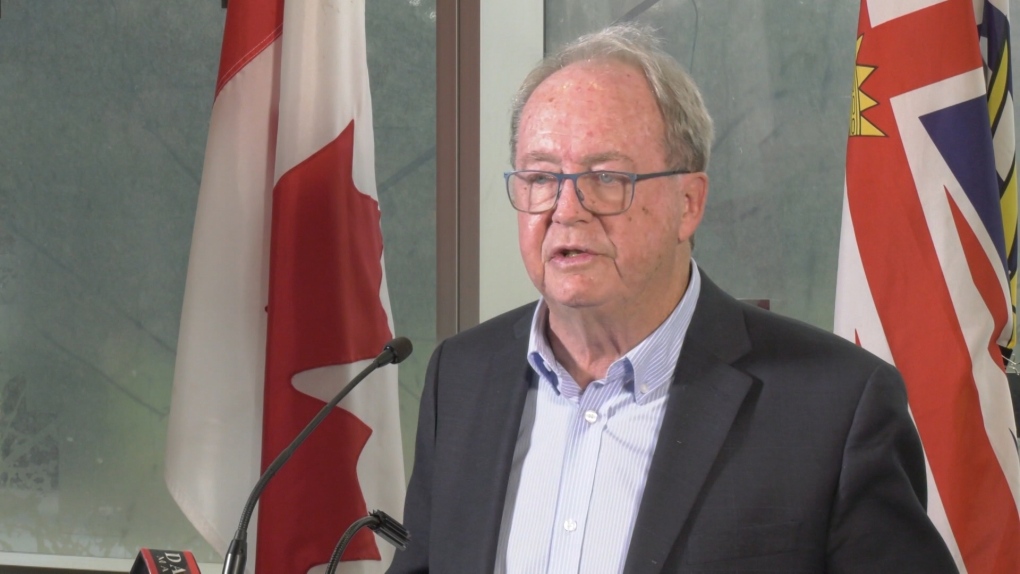 Surrey Mayor Doug McCallum is seen at a news conference at city hall on Jan. 27, 2020.
Vancouver -

RCMP are asking anyone with information on an altercation between Surrey Mayor Doug McCallum and a grey Ford Mustang Saturday afternoon to please come forward.

Police say the incident took place at a Save on Foods at around 12:30 p.m. during what they say was a “Keep the RCMP in Surrey” gathering on 152nd Street in Surrey, B.C.

Anyone who witnessed or has dash camera footage of the confrontation is asked to contact police.

McCallum said Sunday he was out grocery shopping when he was “verbally assaulted” and hit by a car.

He said he was doing OK after being “run over by a vehicle,” and that police were investigating.

This report by The Canadian Press was first published Sept. 7 2021.

The Canadian government has quietly lifted its advisory against non-essential international travel, marking the first time since March 2020 that the notice has been lifted. 'Be aware that although you are better protected against serious illness if you are vaccinated, you may still be at risk of infection from the virus that causes COVID-19,' the updated advisory states.

A search prompted by ground-penetrating radar is resuming again on land in Edmonton that houses a former hospital where Indigenous patients suffered abuse.

Queen Elizabeth II spent a night in a hospital for checks this week after cancelling an official trip to Northern Ireland on medical advice, Buckingham Palace said Thursday. The palace said the 95-year-old monarch went to the private King Edward VII's Hospital in London on Wednesday for 'preliminary investigations.'

Skyrocketing propane prices could mean trouble for some Canadians this winter

Canadian propane prices are skyrocketing alongside natural gas due, in large part, to growing demand from overseas markets, a price surge analysts say will have a big impact on rural Canadians this winter.

A woman has been killed and a man injured Thursday after they were shot by a prop firearm at a movie set outside Santa Fe, authorities said.