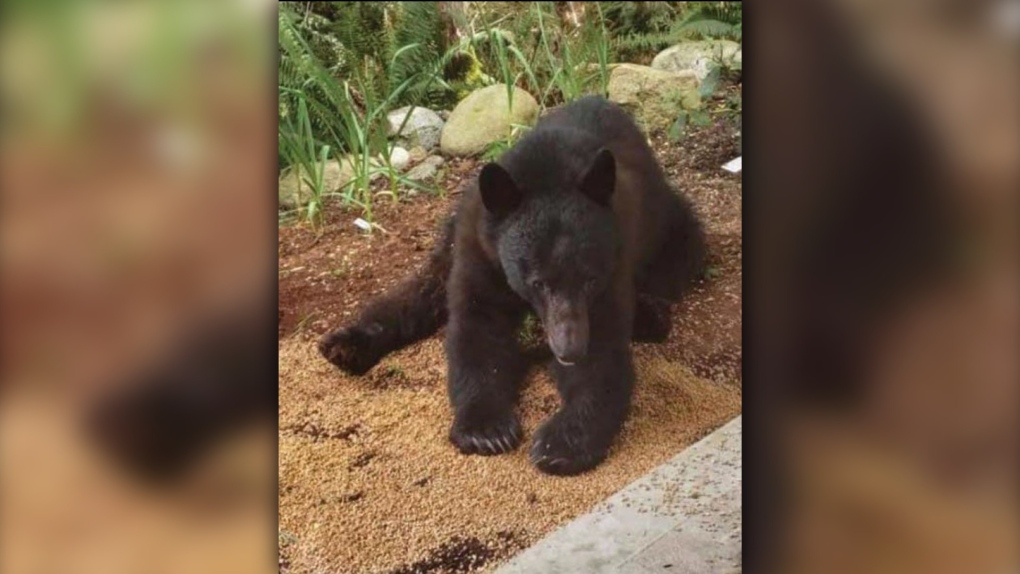 A bear is seen feeding on grain outside a home in Sechelt, B.C., in an image posted to social media in April 2020. (B.C. Conservation Officer Service)
Vancouver -

A man living on B.C.'s Sunshine Coast has been fined $900 after letting a family of bears feast on a pile of grain outside his home.

The incident happened in April 2020, but only recently made its way through the court process, resulting in a stiff fine for attracting dangerous wildlife to a premises.

The B.C. Conservation Officer Service said it was alerted the what happened by social media images showing a bear and cub mowing down on a significant quantity of grain that was spread on the ground.

Const. Leyland Klassen told CTV News some of the grain was in a pot that the bears apparently knocked over, but that there was an additional pile of grain left unprotected nearby. It's unclear why the attractants were left outside.

"The fact of the matter was the grain was out there," Klassen said, adding that the resident also failed to respond appropriately after the bears began feeding.

"It basically elevated beyond regular carelessness because there was no action taken after the fact to try and rectify the problem. It was left out essentially all day long."

The constable suggested the man responsible may have taken the position that "they're cleaning it up for me, so why would I stop them?"

Conservation officers were already on the alert because a family of bears had recently approached two children in a local backyard. Klassen said it's impossible to know for sure, but they believe the same bears were involved in both incidents.

There were additional bear conflicts in the area after the grain feeding frenzy, but the animals eventually left Sechelt on their own before becoming too habituated to humans.

Klassen said it could have gone much worse, as "leaving grain out like that is going to start a bear down the wrong path."

"At the end of the day, bears are looking for food, which is their natural behaviour. The ball is in the public's court to keep non-natural food away from them so they go for the natural stuff," he said.

People living near bear habitats should always manage their attractants, Klassen said. The B.C. Conservation Officer Service asked anyone who spots a property with unprotected attractants lying out to call the Report All Poachers and Polluters hotline at 1-877-952-7277.

Tips on how to respond after encountering a bear are available on the B.C. government's website.

With just three days now until the federal election, the main party leaders will be keeping the campaign throttle wide open today as they chase any still undecided votes in Ontario, Quebec and Nova Scotia.

Lots of planning, data go into planning where leaders visit during a campaign

With only four ridings, Hamilton, Ont. doesn't have the electoral bounty of Toronto, Vancouver or Montreal. But depending on who you talk to, all four Hamilton ridings could be in play, and in close races, the leader's appearance can generate a needed bump.