Study says sea lice not at fault in 2002 salmon crash 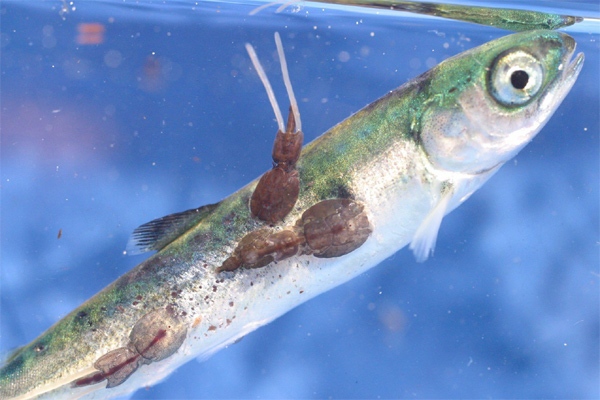 A young pink salmon with a sea lice infestation is shown in this handout photo. (Alexandra Morton / THE CANADIAN PRESS)

Sea lice have been the prime suspect for killing millions of pink salmon in B.C.'s Broughton Archipelago, but a new study appears to acquit the parasite for the near demise of an entire salmon run.

The study, done by researchers in B.C., Alaska and California, doesn't determine the cause of the pink salmon crash in 2002, but it says it wasn't sea lice.

The findings are the exact opposite of what many other researchers have suspected and the report was quickly denounced as outrageous and highly political by biologist Alexandra Morton, who's been studying sea life in the Broughton for decades.

For this latest study, fish farms in the Broughton area, on B.C.'s mid-coast about 350 kilometres northwest of Vancouver, unlocked their vault of information for the first time and gave researchers their data.

Last week, the Cohen Commission -- the inquiry studying the dramatic decline in the 2009 sockeye salmon run on the Fraser River -- ordered the B.C. Salmon Farmers' Association to submit records on fish health and disease.

Morton found that interesting, saying the fish farms weren't turning over information to the royal commission that they'd already handed over to the researchers.

"It's funny to see that somebody already has it," said Morton

Lead researcher Gary Marty, a veterinary pathologist at the University of California Davis, said most of the sea lice found on juvenile pink salmon did come from nearby fish farms.

Marty said farm records show there were about two million more lice from the farms affecting the 2001 salmon run compared to the 2002 run, yet the 2001 pink salmon had record returns, while the 2002 run collapsed.

That information alone told researchers that something other than sea lice must have killed the 2002 salmon, said Marty.

Sea lice are naturally occurring parasites that thrive in warm water temperatures and high salinity levels. They attach themselves to the salmon's skin, fins and gills and feed off their host.

But Morton said the study attempts to undo 10 years of hard work by many experts who are convinced sea lice played a major role in the decimation of the 2002 salmon run.

"I think that this is a highly political paper," she said. "One of the things that jumps out right away is this group of authors was given access to the sea-lice data off of salmon farms, which they have denied us over the last 10 years."

Study co-author Sonja Saksida, a director at the B.C. Centre for Aquatic Health Sciences in Campbell River, B.C., said she's worked with fish farms in the area for 15 years and that allowed her to gain the owners' trust.

Three companies operate 26 farms in the archipelago with an annual production of about 17,000 metric tonnes, or three million fish every year.

Saksida said she was clear with the companies that they were giving the data unconditionally and the results they found would be published no matter if they were positive or negative.

"They agreed and they were really helpful in providing access to the data for this project."

But if sea lice didn't cause the near total loss of the run, what did? Morton asked.

"If they want to theorize that the fish died of something else, they should bring that evidence forward."

That's the frustration, Marty said, adding they'll likely never know what happened to the run because scientists didn't analyze the fish at the time.

Marty said his group studied pink salmon in 2007 and 2008 and found that of 1,070 fish they looked at then, two fish were impacted by sea lice and about 30 per cent of the fish looked like they had some type of toxin exposure.

"So we would suggest maybe spending more time looking at what might be killing 30 per cent of the fish and maybe you don't need to spend as much time on what killed two fish."

The study will be published online this week in the Proceedings of the National Academy of Sciences.

On Friday, the federal government took over regulation of the B.C. fish farming industry with a promise of more regulation, transparency and oversight.