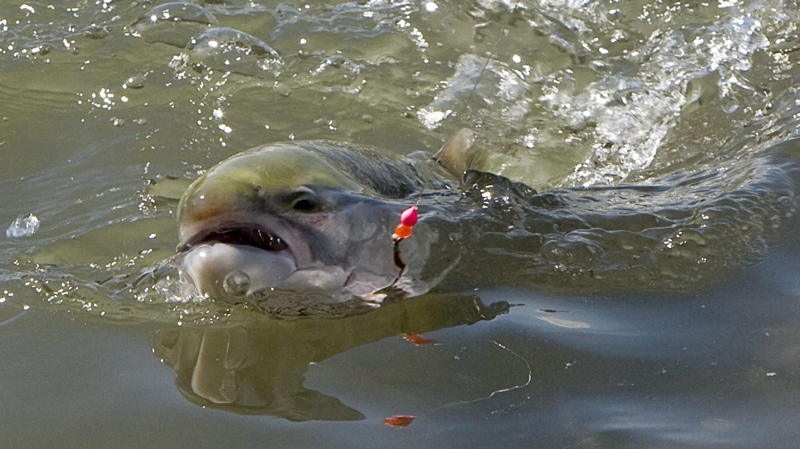 A sockeye salmon is reeled in by a fisherman along the shores of the Fraser River near Chilliwack, B.C., Wednesday, Sept. 1, 2010. (Jonathan Hayward / THE CANADIAN PRESS)

Federal Fisheries Minister Gail Shea was in Vancouver to sign a memorandum of understanding with B.C. Agriculture and Lands Minister Ben Stewart, who had responsibility for salmon farms and ocean aquaculture until a landmark B.C. Supreme Court ruling last year forced the transfer.

"The new regulatory regime will provide the industry with operational certainty, ensure the public knows the environment will be protected and provides the most efficient and effective management regime possible," Shea announced.

The shift will see Ottawa in control of the cultivation of fish, enforcement of new Pacific aquaculture regulations and the conditions of licensing for fish farms.

"The new regulation and conditions of licensing will mean stronger environmental control, as well as increased monitoring and enforcement," Shea said.

She added that fish farms will be required to provide more data that will be made public for analysis. An ongoing public inquiry into the state of B.C.'s wild salmon stocks recently ordered salmon farming companies to turn over some of its data which has never before been released.

The inquiry was announced last year, after an abysmal year for salmon runs on the Fraser River that led many to fear the stocks had completely collapsed. The inquiry by commissioner Bruce Cohen is going ahead although this year saw historic returns.

Stan Proboszoz, of the Watershed Watch Salmon Society, said that data reporting must be made mandatory and not optional.

"Transparency concerning fish health data on salmon farms is critical as was recently affirmed by justice Bruce Cohen's ruling," he said in a statement.

"If (the Department of Fisheries and Oceans) wants a management regime that rebuilds public confidence as they claim, transparency should be the cornerstone of the new aquaculture regulations."

The shift to federal control comes in response to the lawsuit launched by several environmental groups critical of the salmon farming industry. The B.C. Supreme Court ruled that the province had to relinquish jurisdiction to Ottawa, which has oversight of offshore fisheries.

Although the change was court-ordered, Stewart hailed the new agreement as mutually beneficial.

"The Ministry of Agriculture will continue as the lead provincial agency for the strategic development of the aquaculture industry in British Columbia," he told reporters.

"This means working with producers in the development of new products and new markets."

Ottawa says the changes will cost about $8 million a year, which is expected to be recuperated through licensing fees.

The federal government said it will be hiring 55 new staff, who will mostly be stationed in Vancouver and on Vancouver Island and many of whom will come from the province's aquaculture branch in the Agriculture Ministry.