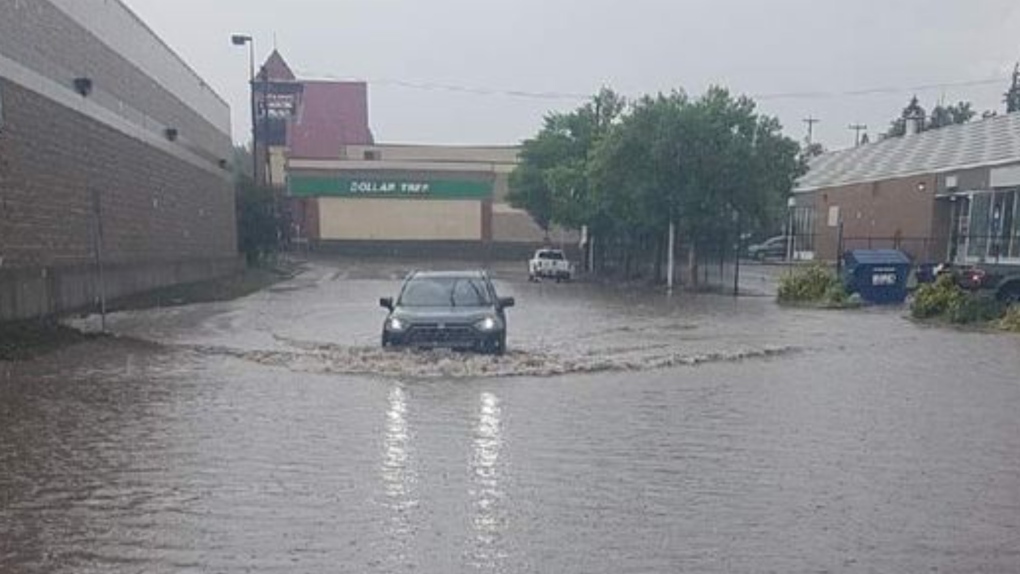 A flooded street is seen in Prince George, B.C., during an intense storm. (Facebook/Alison Hudyma)
VANCOUVER -

The city of Prince George is the latest to feel the lash of torrential downpours linked to ongoing unsettled weather across British Columbia.

A similar downpour forced officials in Penticton to briefly declare a local state of emergency on Monday as a sudden rainstorm over that Okanagan city caused flash flooding and prompted the evacuation of 16 properties.

The River Forecast Centre has since downgraded Mission Creek from a flood watch to a high streamflow advisory as levels of that Kelowna-area waterway subside, but advisories remain posted across most of southeastern and southern B.C., including the Fraser River from Quesnel to the ocean.

Flood watches cover sections of the Thompson, South Thompson, Chilcotin and Nechako rivers and a flood warning is still up for parts of the Quesnel River near Quesnel.

Environment Canada is calling for thundershowers through the day in many B.C. regions and forecasters say that creates the potential for more localized flooding, but exact locations and intensity of rainfall are uncertain.

This report by The Canadian Press was first published July 6, 2022.

A group on Prince Edward Island is calling for a return to tougher COVID-19 restrictions in the province.

Police in Rio de Janeiro on Wednesday were seeking the arrest of six people accused of involvement in stealing 16 artworks together valued at more than 700 million reais (US$139 million), some of which were recovered.

Making baby food at home with store-bought produce isn't going to reduce the amount of toxic heavy metals in the food your baby eats, according to a new report released exclusively to CNN.