Stanley Cup riot review to be released this week 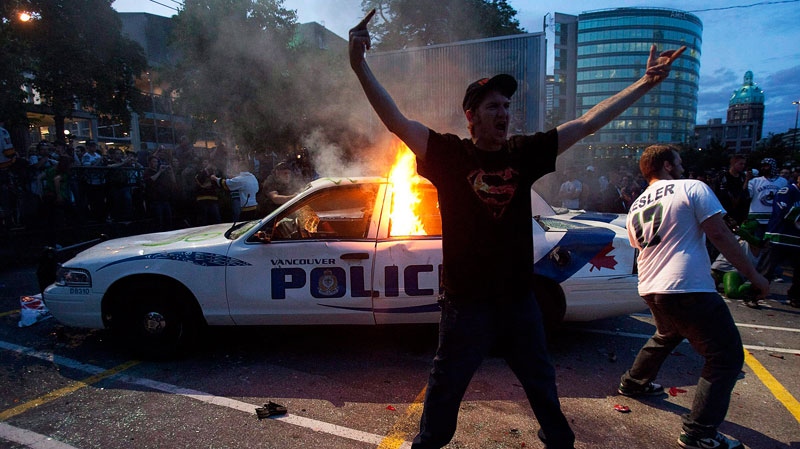 A police car burns during a riot in downtown Vancouver, following the Vancouver Canucks 4-0 loss to the Boston Bruins in game 7 of the Stanley Cup hockey final, Wednesday, June 15, 2011. (Geoff Howe / THE CANADIAN PRESS)

An independent review into Vancouver's Stanley Cup riot is set to be released Thursday, more than two months after several blocks of the city's downtown were left a mess of broken glass and burnt-out cars.

The province appointed John Furlong, former head of the Vancouver Olympic committee, and Doug Keefe, a former deputy justice minister from Nova Scotia, to lead the independent review into what happened on June 15.

They were told to examine what factors led to the riot, how well the city's police force was prepared, whether lessons from a similar riot in 1994 were put into practice, and how to avoid a repeat in the future.

Thousands of fans had gathered in front of several giant screens in a so-called fan zone when, in the dying minutes of the Canucks' final game against the Boston Bruins, rioters set the first vehicle on fire.

Photos of jersey-clad fans standing on top of burning cars or streaming out of the Bay's flagship store carrying high-end fashion accessories were beamed to the Internet in real time.

It took several hours for police to get the riot under control and disperse the crowds, and by then rioters had already caused millions of dollars damage.

The riot cast a cloud over a city that had basked in the international spotlight a year earlier when it hosted the 2010 Winter Olympics, and few levels of government have escaped criticism.

In particular, the police have been forced to repeatedly explain why no rioters have yet been charged -- a fact that has been contrasted with hundreds of speedy convictions that followed riots earlier this month in London.

Chu explained the force is sorting through thousands of photographs and 1,600 hours of video from the riot.

Even though more than three dozen people have turned themselves in, Chu said investigators still need to gather evidence to support charges, and in some cases people who have offered confessions to minor acts may have actually committed more serious crimes.

In B.C., it is the Crown that decides whether to formally lay charges, not the police, but prosecutors have been waiting for evidence from police investigators.

In the days that followed the riot, Premier Christy Clark promised the rioters would face fierce justice. She's since had to deflect criticism from the Opposition New Democrats over funding for the justice system.

And Mayor Gregor Robertson, who will run for re-election in the fall, has faced attacks from his main political rival, who has attempted to brand the Stanley Cup melee "Robertson's Riot."