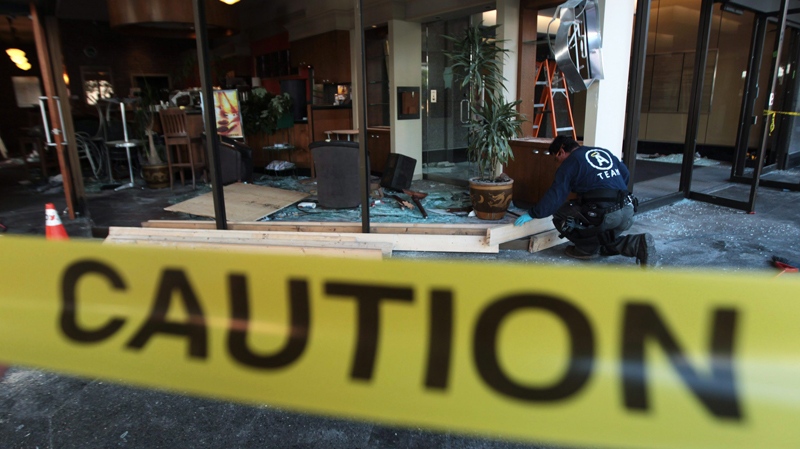 A restoration worker prepares to board up broken windows at a coffee shop in Vancouver, B.C., on Thursday June 16, 2011, after the store was damaged and looted by rioters following the Vancouver Canucks loss to the Boston Bruins in the NHL's Stanley Cup Final Wednesday night. (Darryl Dyck / THE CANADIAN PRESS)

About two dozen people who were working in downtown Vancouver the night of the Stanley Cup riot have filed workers' compensation claims for physical and psychological injuries, according to WorkSafeBC.

"About half the claims are for health care only, so injuries that did not require the worker to take time off," Johnston said. "They had medical treatment and WorkSafe would pay for that."

Post-traumatic stress disorder can take time to present itself, Johnston added, and more claims could emerge in the future. Workers have until one year after the riot to file a claim.

WorkSafeBC did not say which employees or which businesses were involved, but several downtown businesses remained open at the outset of the June 15 riot, including Blenz Coffee.

Three Blenz locations were torn apart during the mayhem, and a civil lawsuit filed by the coffee chain last month alleges two of its employees and a customer wound up trapped and terrorized for hours in a back room at one of them.

Employees at the Chapters on Robson Street were stacking shelves when the riot broke out, but were quickly ushered from the store. No staff injuries were reported, and the company says none of its employees have yet filed compensation claims.

Only employees who were injured either physically or emotionally while on shift are eligible for compensation claims, WorkSafe said.

The Downtown Vancouver Business Improvement Association says as many as 60 businesses suffered upwards of $5 million in damages as the roving rioters smashed windows and looted stores.