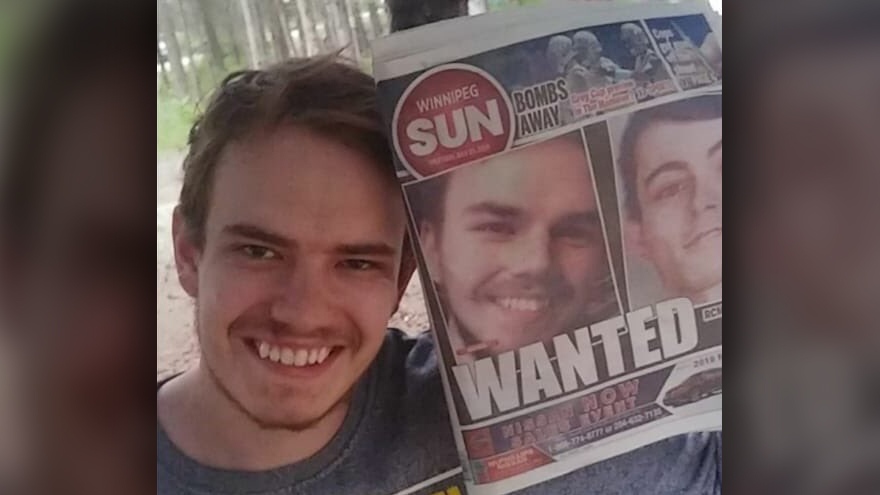 An innocent man who bears a strong resemblance to B.C. murder suspect Kam McLeod is seen in this image circulating on Twitter.

An image being spread on social media of a man who bears a striking resemblance to Kam McLeod is not actually the murder suspect, according to law enforcement.

The image shows a man in a Wu-Tang Clan shirt holding up a copy of Thursday's Winnipeg Sun newspaper, which has pictures of 19-year-old McLeod and his co-accused, 18-year-old Bryer Schmegelsky , on the front page.

Though the unidentified man posing in the picture has a similar face to McLeod's, complete with matching facial hair, the RCMP said they are different people.

"We can confirm that the current photo circulating online of a man posing with the front page of yesterday's paper IS NOT one of our suspects," the Manitoba RCMP tweeted.

McLeod and Schmegelsky are charged with second-degree murder in the killing of UBC lecturer Leonard Dyck, whose body was discovered last week near Dease Lake.

The childhood friends from Port Alberni are also suspects in the shooting deaths of Chynna Deese and Lucas Fowler, whose bodies were found along the Alaska Highway in northern B.C.

Police have been tracking McLeod and Schmegelsky across the country, and believe they are currently somewhere outside the small Manitoba community of Gillam, population 1,265.

Heavily armed police have been scouring the area for days, and have narrowed their search to a dense, wooded area about 1,000 kilometres north of Winnipeg.

If they are trekking through the wilderness on foot, authorities said they are likely having a very hard time, given the ruggedness of the terrain and the abundance of insects.

We can confirm that the current photo circulating online of a man posing with the front page of yesterday’s paper IS NOT one of our suspects. #rcmpmb