Commuters taking transit in Metro Vancouver Thursday morning may experience delays and detours on their routes because of winter conditions.

Snow blanketed the region overnight and with freezing rain on the way, roads could get even more slippery throughout the day.

TransLink issued a warning to its customers saying bus and SkyTrain service may be delayed or cancelled across the system.

"We continue to salt and sand bus loops and SkyTrain stations, but please use caution in these areas; there may be extra crowding on some bus routes and SkyTrain platforms today," TransLink's notice said.

As of 7 a.m., there were 145 alerts for buses posted on TransLink's website, though not all of them were because of the weather. Some routes, however, were cancelled for the day and many had detours. Others, like those taking the 257 to Horseshoe Bay, had to transfer mid-trip to a smaller bus because of the road conditions.

Those heading to the University of British Columbia may be able to use the UBC snow shuttle as needed to get from Alma to UBC via Blanca Loop.

For some taking SkyTrain, the trains were completely packed Thursday morning. TransLink said those taking one of the trains may notice "larger gaps in service than normal" as they're being staffed manually by attendants. The transit authority explained this helps make sure snowfall doesn't trigger emergency breaking.

All Expo Line trains from Waterfront Station are stopping at King George, TransLink said. Meanwhile, those heading to Production Way-University Station should transfer at New Westminster or Columbia Stations.

"This modification to service allows us to increase train frequencies for customers while trains are being manually staffed," TransLink explained. 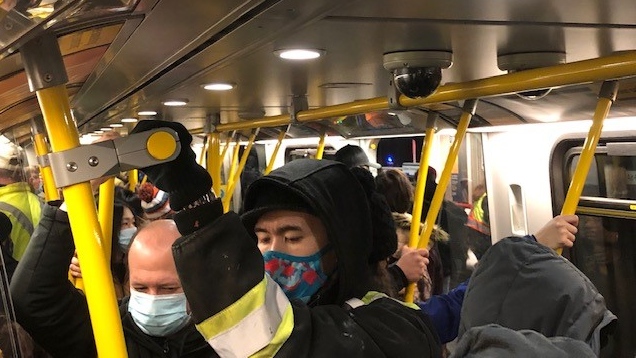 SkyTrain was crowded on Jan. 6, 2022, as trains were running less frequently due to snow.

Earlier this week, sudden snowfall led to chaos for some routes. Leading to and from the Granville Street Bridge Tuesday night, a long line of more than 10 buses was seen parked along the road.

"Our buses are only as good as the roads are clear," said Tina Lovgreen, spokesperson for TransLink.

"We're calling in extra staff … we're also running de-icer on our trolley overheads and our rail tracks as well. In addition to that, we're salting and sanding our transit centres, our transit loops."

Even so, customers are warned to expect delays and leave more time for their commute.