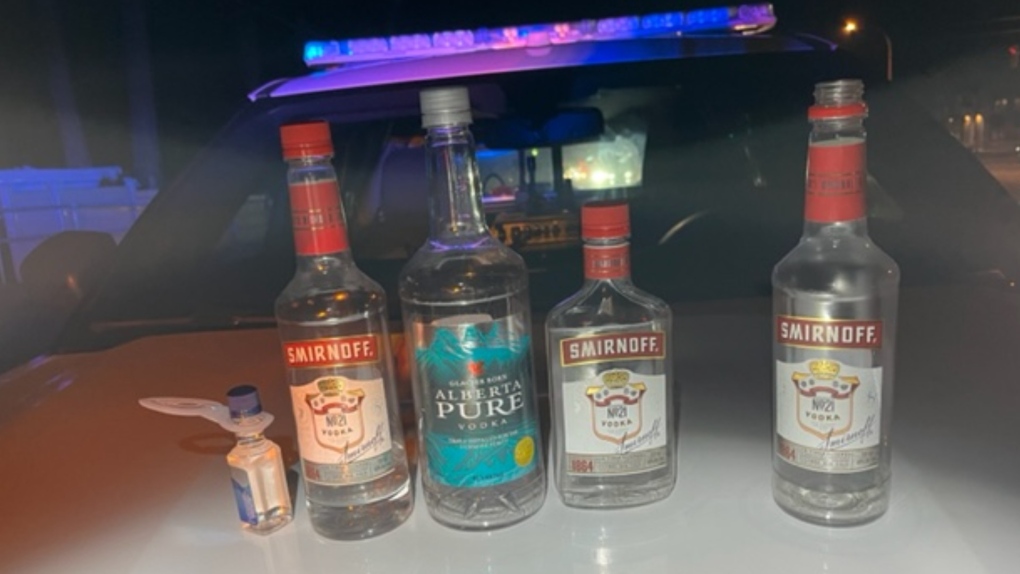 This phot shared by the Surrey RCMP on Twitter shows alcohol allegedly seized from the driver of a big rig.

In a post to social media, Surrey RCMP shared a photo of five vodka bottles of various sizes that were allegedly seized from the driver. The detachment shared the information as a caution about the dangers of drinking and driving, especially when operating a large commercial vehicle.

According to ICBC, 64 people die each year in the province due to alcohol-related crashes and roughly one-in-four fatal collisions involve alcohol.

"Almost a third of these happen in the summer and some occur during the December holidays," the insurer's website says.

More than half of crashes involving alcohol happen on the weekends, while 36 per cent happen between 9 p.m. and 3 a.m.

Fines for driving while impaired range from $600 to $4,060, and additional consequences can include jail time, mandatory rehabilitation, and the installation of a device that requires a driver to provide an alcohol-free breath sample before starting the ignition.

Drinking & driving puts the public at risk. Especially when you are driving a big rig. A semi truck driver was caught with open liquor in D3. The truck was impounded for 30 days & the driver was issued a 90 day Immediate Roadside Prohibition. Don’t drive & drive! pic.twitter.com/xMFTOxjGD7