This year, they won’t even open.

The family-run farm in Abbotsford, B.C., is among dozens hard-hit by the heat wave that has been suffocating the province.

“We can’t sell this kind of product to our customers,” said Ben Janz, who has lived on the farm more than 50 years.

“It’s been tough because some of these people have been with us for years and we’ve really appreciated their business. We’ve just had to say sorry, this year is a write-off," he said

“We’ve had rain and we’ve had some heat (over the years) but nothing, nothing like this. This is just crazy."

He said the heat has seriously damaged berries, leaving many white in colour after being “sun-burned." He said even the taste isn’t the same.

“A lot of these, they are just totally baked. They should have been developing more. A lot of them are still very small and they have already turned red,” he explained.

His words are echoed by other farmers, including James Bergen, who has about 150 acres in raspberries in Abbotsford.

“It is harder to pick when the sun scald gets on the berries but the quality is useless for anything but juice,” said Bergen.

“We should be picking five to six thousand pounds a day right now of fresh raspberries, and we’re lucky if we are able to pick a thousand pounds, and that’s with going through and sorting. We basically lost half of our fields that are in full production,” he explained. 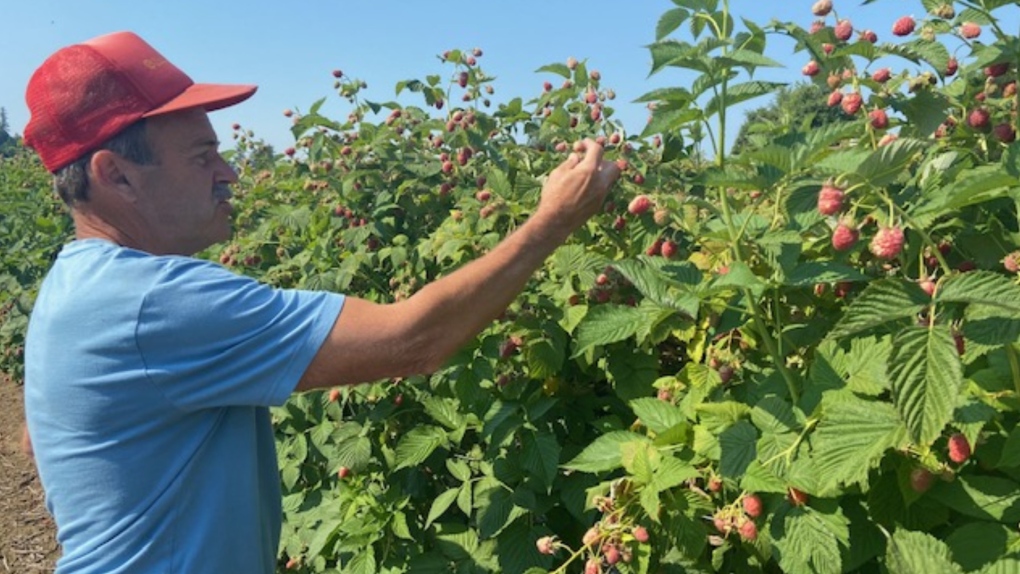 “We had a good crop going into the season…I don’t think we know the true extent of the damage,” he added, calling it the worst weather-related event he’s experienced in his 25-plus years of farming.

“All the leaves have been burnt,” he said, even though the field has been irrigated.

He said many of his other crops, including a field of corn, will be lost.

“They might produce little corn but we won’t be able to sell it,” he said.

Bhatti expects to lose 25 to 30 per cent of his various vegetable crops but said other growers have it much worse.

“One of my growers, he lost 100 per cent, all the cauliflower, broccoli,” he said.

There is government-run insurance available to some farmers, depending on their crops, but some vegetable growers say it doesn’t cover their actual losses and can be very expensive.

Bhatti is calling for an emergency fund to be made available to farmers suffering crop losses.

Meanwhile, berry farmers are hopeful that cooler temperatures will help.

“I’m hoping and praying they’re going to start releasing from the stem and we’ll be able to salvage something,” Janz said.

Bergen said that despite a year’s worth of work and preparation wasted, it’s encouraging to see many farmers reaching out to one another through it all.

Back to school: A look at the COVID-19 rules in place across provinces, territories

As students across Canada gear up to enter what will be their fourth academic year in the pandemic, CTVNews.ca takes a look at what measures will be in place in schools, by province and territory.

As of today, individuals and businesses are no longer able to import restricted handguns into Canada, with limited exceptions. The move announced earlier this month is aimed at expediting a key pillar of the federal effort to cap the number of handguns in the country.

Transport Minister Omar Alghabra is set to testify before the House of Commons transport committee this afternoon about ongoing airport delays and flight cancellations.

Canadian flags hang alongside those of the French and British on the streets of Dieppe, France, each August as the city marks the anniversary of an important and disastrous day during the Second World War.