'Running out of room': Vancouver graveyard charging $25K per plot

The struggle to find affordable real estate in Vancouver is a challenge not only for the living.

A shortage of space is driving up the costs of burials in a city where available land is often fast bought-up and redeveloped for housing.

A principal at LEES+Associates, a Vancouver-based landscape architecture and cemetery planning firm, said the lack of space for plots has been an issue for decades.

"It was even clear back in the '90s… Vancouver is running out of space," Erik Lees told CTV News Channel on Wednesday.

Vancouver has only one graveyard, Mountain View Cemetery, which has been owned and operated by the city since 1886. 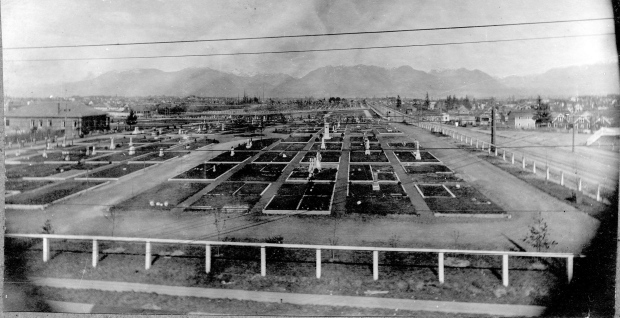 Mountain View Cemetery is seen in this photo taken in the early 1900s. (City of Vancouver Archives)

For those willing to pay to spend eternity on the hill-side property, there is space for both casket burials and cremated remains, both above- and underground. The available casket lots, the city says, were purchased more than 70 years ago and never used or claimed by the buyers or their families.

Those who will be cremated but want a lasting place for their remains, the city charges between $3,600 and $4,600 for a two-space in-ground lot.

Side-by-side cremation niches, which are located in an area with others and not necessarily near their relatives' or friends', pay between $3,200 and $4,600 depending on how high up the wall their niches are. 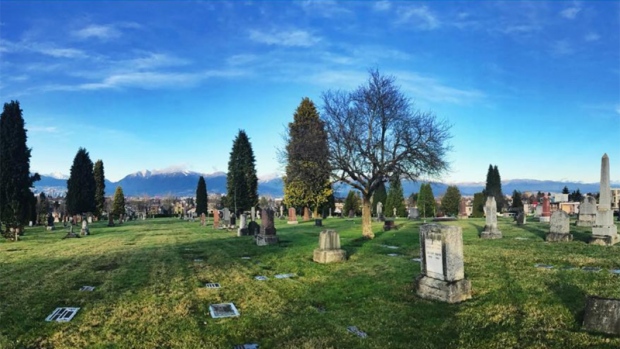 Vancouver's Mountain View Cemetery is seen in 2016, in a photo posted to Instagram by user @7nicka.

In Coquitlam, the cost of a single-casket burial ranges from $5,223 for a resident of the city to $7,773 for a former resident. Casket burial in any of Surrey's three city-run cemeteries costs between $2,575 and $4,175 for adults, depending on lot size and location and whether the deceased was a veteran.

Casket burial prices at Royal Oak Burial Park in Victoria range from $4,365 for a greeen lot to a starting price of $11,950 for a two-person indoor crypt.

Lees said the lack of space is largely due to issues with urban planning. Those in charge of land allotment often forget to leave room for cemeteries.

In a city constantly under construction like Vancouver, land developers are looking at where to put living residents, not where to lay the dead.

"We've managed to, on the whole, build healthy cities with good infrastructure and downtown cores and housing and employment lands, but we've forgotten about cemeteries," Lees said.

"We've forgotten about that end-of-life experience, and we've really neglected the importance of remembrance and places of grief and mourning."

There are solutions for finding more room, but they aren't easy and "only go so far," he said.

Some cities are filling in unused roads and ditches to make room for graves, but the amount of land freed up by such projects is finite.

There are also "green" burial options available in B.C. Bodies are prepared without embalming, then buried in a shroud or casket made from natural materials in a protected green space within a cemetery.

And many cemeteries now offer "scattering" options for cremated remains.

Coquitlam's city-run Robinson Memorial Park Cemetery offers mourners the option of having ashes scattered in its communal Hemlock Garden, for $322. Surrey offers a scattering option for $190.

For those who don't want their remains in a cemetery, there are no provincial laws prohibiting loved ones from scattering ashes on land, at sea or in the air, the BC Funeral Association says. But remains cannot be scattered on any property in B.C. without the owner's permission.

"Frankly, if it weren't for cremation this crisis would be upon us some years ago," Lees said.

"If all those people had chosen traditional in-ground burial we'd be in a real bind."

The rising rate of cremation in Canada is easing the burden on the country's cemeteries, but many still prefer casket burials for religious or cultural reasons.

"In a diverse society like ours, we need to be sure that those ethnic and religious groups that do not support or do not condone cremation have a place to bury their dead and have sacred burial grounds," Lees said.

Canada could also consider a system similar to those in other countries like the Netherlands, Germany, Belgium, Greece and Singapore, where graves are essentially rented instead of owned.

The gravesites are recycled after a body has lain in a gravesite for decades. Some countries offer public gravesites for free for some years, then offer the family the choice to pay rent to keep it. If they don't pay, the site will be reused, and the remains currently in the grave will either be buried further into the ground or moved to a mass grave elsewhere.

In the Netherlands, grave rights entitle those who've paid to control over a burial site for only 10 to 20 years, according to research from the University of Groningen. Numbers vary based on location in the country, but the average grave cost outlined in the research was €1,742, or about C$2,462.