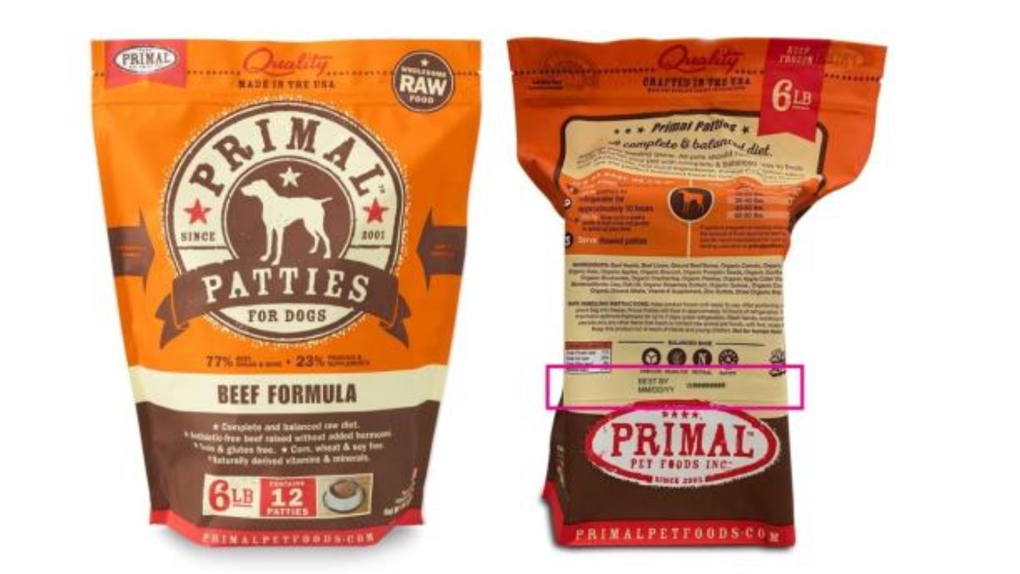 A U.S.-based pet food company is recalling a raw, frozen dog food product that was sold in B.C. because of possible Listeria contamination. (Health Canada)

A U.S.-based pet food company is recalling a raw, frozen dog food product that was sold in B.C. because of possible Listeria contamination.

The Primal Patties for Dogs Beef Formula food was sold in six-pound bags between April and July, according to a recall notice published by Health Canada on Friday.

The affected product has the lot code number W10068709, which can be found on the back of the package above the Primal Pet Foods Inc. logo.

Anyone who purchased the potentially contaminated dog food, which has a best before date of May 22, 2023, should immediately stop using it and dispose of it, Health Canada said.

A total of 42 bags of the affected lot were sold, according to the recall. Only the listed lot number is believed to have been contaminated.

Listeria monocytogenes is a type of bacteria that can cause cross contamination and illness after handling the pet food, Health Canada said.

The bacteria can cause "serious and sometimes fatal infections in humans and animals," according to the recall notice.

"Symptoms of infection may include nausea, vomiting, aches, fever, and diarrhea, and may lead to more serious issues such as meningitis and abortion," Health Canada added. "Healthy people and animals can be infected, and some are more susceptible, including young children, pregnant women, frail or elderly people, or others with weakened immune symptoms."

As of Aug. 2, Primal Pet Foods, Inc., had not received any reports of illness associated with the product in Canada, according to the recall.

The company invites customers to read the voluntary recall announcement on its website and to contact it for more information, Health Canada said.

Videos of protests in Iran leak despite internet bans

Videos of revolts and unrest started to flood the internet when Iranian protestors flocked to the streets in response to the death in custody of Mahsa Amini, a 22-year-old woman allegedly detained for wearing her hijab improperly.

North Korea launched two short-range ballistic missiles toward its eastern waters Thursday after the United States redeployed an aircraft carrier near the Korean Peninsula in response to Pyongyang's previous launch of a nuclear-capable missile over Japan.