Province urges motorists to be prepared, drive cautiously as winter sets in 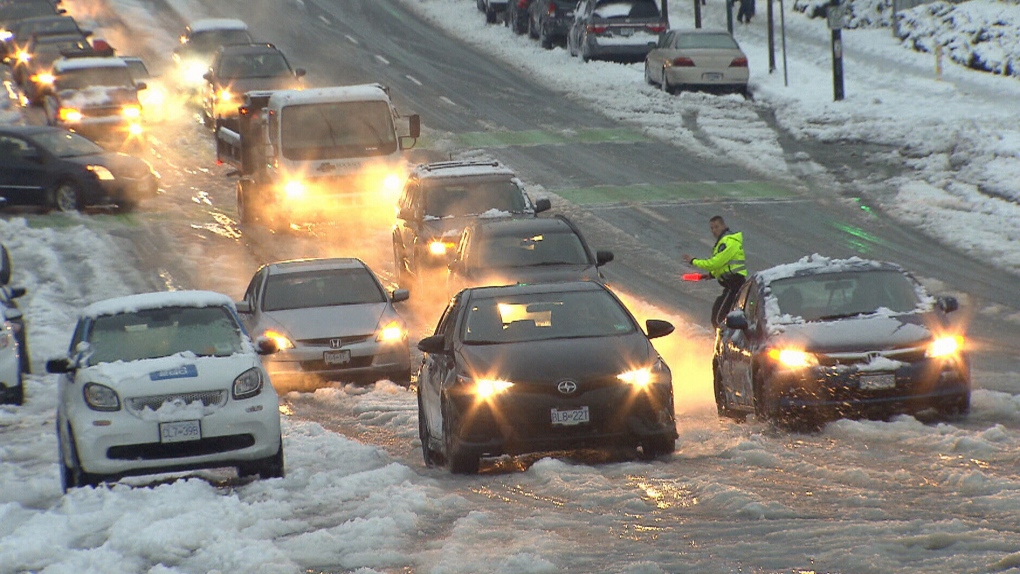 The warnings come after an unusually harsh 2016-17 winter that led to particularly hazardous driving conditions in the Lower Mainland.

With winter fast approaching, provincial officials are urging British Columbia drivers to prepare their vehicles and exercise caution on the road.

“Nothing is more important than the safety of motorists on our roads,” Transportation and Infrastructure Minister Claire Trevena said at an event Monday.

Trevena offered several tips as part of the “Shift Into Winter” campaign, a joint provincial initiative aimed at improving road safety during the winter.

Drivers are encouraged to install four matching winter tires on their vehicles, to clear all snow and ice from the outside of their vehicles and to carry an emergency kit that includes a blanket, first aid supplies, water, a snow brush and shovel, jumper cables, antifreeze and food.

According to B.C.’s winter tire rules, which came into effect Sunday, motorists must use winter tires on certain roads, including the Sea-to-Sky Highway. The Ministry of Transportation’s website has detailed maps of the routes that require winter tires.

Drivers who do not follow these rules can be fined $109.

Winter tires should have a mountain and snowflake symbol or the “M+S” (mud and snow) symbol on the side and have at least 3.5 millimeter-deep tread in order to provide good traction and safe stopping distances.

Trevena also emphasized this year’s campaign slogan,“Conditions change. So should your speed,” urging drivers to slow down and leave extra following distance.

These precautions are particularly important for taxis drivers, first responders, commercial truck drivers and others who are on the road as part of their jobs, Labour Minister Harry Bains said Monday.

“For people who drive to work, the next three months are the most dangerous in terms of increased car accidents, injuries and fatalities,” he said, adding that employers “have the responsibility” to ensure employees are trained to drive in the winter and have access to vehicles than can handle the conditions.

Under provincial law, employees have the right to refuse to work under any conditions they believe are unsafe, including driving.

These warnings come after an unusually harsh 2016-17 winter that led to particularly hazardous driving conditions in the Lower Mainland.

“We experienced some very wintry conditions last year and I’m sure I speak for mean when we hope that this upcoming season won’t be quite as bad,” Trevena said.

Even if conditions are milder this year, officials say the key to keeping everyone safe is preparedness and cautious driving.

“We should be prepared for winter driving no matter where we live or commute in the province,” Trevena said.

RCMP Insp. Steven Ing said Mounties will be conducting “strategic enforcement” targeting drivers who are not considering the winter conditions and putting other motorists at risk.

Last winter, the City of Vancouver began looking at ways to crack down on unprepared drivers, who are often the cause of major delays during the winter months.

In July, the city also approved recommendations to free up more funds for road maintenance.