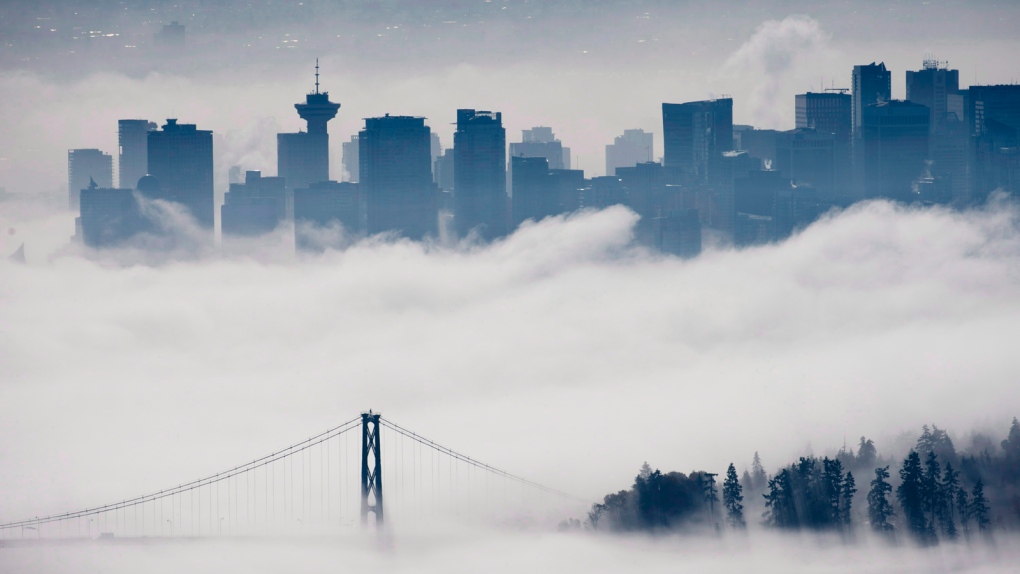 The fog-covered city is seen from Cypress Mountain in West Vancouver, B.C., on Oct. 23, 2013. (Jonathan Hayward / THE CANADIAN PRESS)

VANCOUVER -- In a new economic review released Thursday, the Business Council of British Columbia says the province's economy is "slipping into a deep recession," and is calling on the government to do more.

The organization's Q2 2020 B.C. Economic Review and Outlook forecasts a 7.8 per cent contraction in B.C.'s gross domestic product this year. In March, it was predicting 7.3 per cent. And the recovery will take time.

"In 2021, as the global economy emerges from the deepest downturn in 100 years, BCBC expects a partial recovery in the level of provincial GDP by 4.8 per cent," it says in a release.

The report also includes sobering job numbers. Since February, 350,000 British Columbians have lost their jobs since February, it says, and the provincial unemployment rate sits at 13 per cent.

On Wednesday, Finance Minister Carole James addressed the latest job numbers, and said 90 per cent of B.C.'s job losses have been in the service sector, making women and young people the hardest hit.

Ken Peacock, the Business Council of B.C.'s chief economist, says some of those jobs will return as the economy reopens - but not all.

"The process will be uneven and slow. Many businesses will not reopen, while others will pivot toward digital business models with more automation, and we expect that tens of thousands of jobs will be permanently lost," he says in the release.

"The recovery will be furthered hampered by partial reopenings, physical distancing rules that reduce demand and raise operating costs, and probable changes in consumer preferences and behaviour."

The council says B.C's recession will be "profound" and is calling "for all levels of government to do everything they can to support new company creation and help existing firms stay in business, and look to expand, in the post-crisis world."