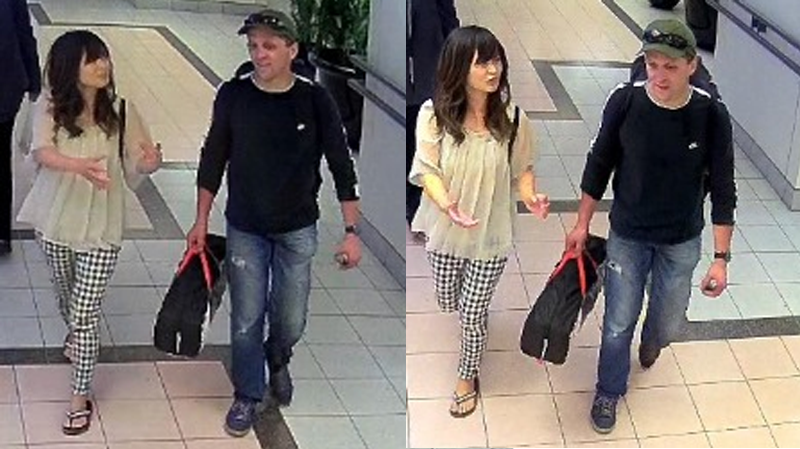 A person of interest was spotted on surveillance video walking with missing Japanese student Natsumi Kogawa on Sept. 8, 2016. (Handout)

Mounties are asking for the public's help identifying a person of interest in the disappearance of Japanese student Natsumi Kogawa.

The RCMP released surveillance images Tuesday showing Kogawa walking with a man near Seymour and Hastings streets in downtown Vancouver on Sept. 8, four days before she was reported missing to police.

The person of interest, who was recorded with Kogawa around 1:30 p.m., is carrying a bag and wearing a dark backpack, as well as a dark jacket, blue jeans, running shoes and a dark baseball cap.

Mounties describe him as white, roughly 30 years old, with a slim build and light coloured hair.

Prior to police obtaining the surveillance images, which were captured at 1:27 in the afternoon, Kogawa's last known sighting was by her roommates at their Burnaby home on Sept. 7. They reported her missing on Sept. 12.

Though the 30-year-old has been known to leave for a couple days without telling anyone, her family said she has never been out of touch for this long.

According to Kogawa's friend, Jay Vergara, she was studying English at Kaplan international English School in Vancouver.

Vergara told CTV News that Kogawa messaged another friend on the morning of Sept. 8 to make plans for later that day, but never showed up.

"I'm incredibly concerned," he said earlier this month. "I really hope for her safe return."

Anyone who knows the identity of the man spotted with Kogawa is asked to contact the Burnaby RCMP detachment at 604-294-7922, or Crime Stoppers at 1-800-222-TIPS to remain anonymous.