Pickton was VPD's top suspect, but he was left to RCMP 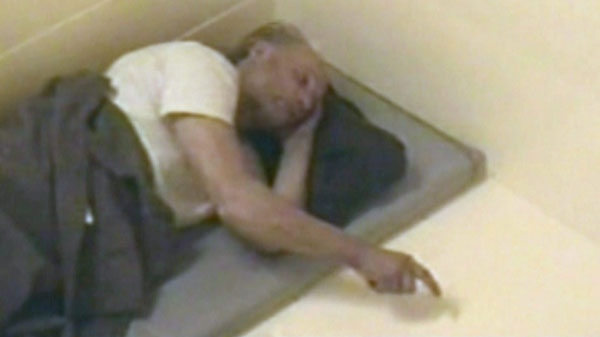 Robert Pickton is shown in his cell in this still image taken from video released by BC Courts. The mammoth investigation and mega multiple trials that ultimately convicted serial killer Robert Pickton cost the British Columbia government more than $102 million.

Robert Pickton was the top suspect in the disappearance of sex workers from Vancouver's Downtown Eastside in the late 1990s, but investigators with the city's police force didn't pursue him because they believed he wasn't in their jurisdiction, the inquiry into the case heard Tuesday.

Deputy Chief Doug LePard said while his force had received "credible" tips that Pickton may have been hunting sex workers in the troubled neighbourhood, those tips suggested he was murdering them and disposing of their bodies at his farm in Port Coquitlam, which is policed by the RCMP.

That meant a team of investigators with the Vancouver police were left to pursue other potential suspects, even though Pickton was at the top of their list by mid-1998 -- nearly four years before his arrest.

"The information about Pickton certainly was that a crime or crimes had been committed on his property in Coquitlam; there was no suggestion or information that any crime had occurred in Vancouver," LePard said during his second day of testimony.

The two police forces have long faced accusations that concerns over jurisdiction -- or even a full-blown turf war -- hampered their abilities to put the pieces together that would have allowed them to stop Pickton sooner.

Pickton first came to the attention of the Vancouver police in the summer of 1998, when the force received two tips through Crime Stoppers that Pickton was picking up sex workers from Vancouver and other areas of the Lower Mainland and killing them at his farm.

At the same time, officers were slowly coming to the realization that the missing sex workers met foul play, possibly at the hands of a serial killer. As investigators drew up lists of potential suspects, Pickton was consistently at the top.

But aside from connecting the RCMP with informants and providing other information, investigators in Vancouver were not actively pursuing Pickton on their own, said LePard.

In December 1999, Vancouver Sgt. Geramy Field, who was in charge of the missing women investigation at the time, wrote in a memo that the Mounties were no longer treating their investigation of Pickton as a high priority.

Even then, LePard said there was little Vancouver police could do other than put pressure on the RCMP to make Pickton a priority.

He conceded that Vancouver police failed to do that.

"Was there more that they could have done. . .? Yes, I believe that there was," said LePard.

LePard noted Field was pressing for a joint-force operation to include the Vancouver police and the RCMP in a single investigation, but that didn't happen until 2001.

LePard said senior management within the Vancouver police weren't doing enough to support such an operation.

"There should have been more management involvement in that," said LePard. "You'll see from acting Insp. Dan Dureau (head of the major crimes section), that he really didn't have a good understanding of what the information was in the case."

LePard was also forced to answer questions about poor staffing that appeared to strain the Vancouver Police Department's missing women investigation from the outset.

At first, reports of missing sex workers were handled by the missing-person unit's lone investigator. By 1998, the unit had an officer, Det. Const. Lori Shenher, assigned full-time to the missing women investigation.

It wasn't until April 1999 -- roughly two years after an increase in reports of missing sex workers -- that the force added a second officer, Const. Dave Dickson, a well-known beat cop in the Downtown Eastside.

By then, both Shenher and Dickson had warned their superiors that the disappearances appeared suspicious and likely related, but senior officers dismissed those theories and instead believed the women were transient and weren't actually missing.

In the spring of 1999, Shenher asked that six additional officers be assigned to the case. She got three.

"Had management of the day truly accepted the nature of the problem, it was possible to resource it properly," said LePard

"But because of the lack of understanding of the nature of the problem, there were incredible resource pressures."

At its height in the summer of 1999, LePard said the missing women investigation had seven full-time staff, including six officers and a civilian clerk. By the end of the year, two of those officers were reassigned to other homicide cases.

Commissioner Wally Oppal is investigating why the Vancouver police and the RCMP failed to catch Pickton as he murdered sex workers in the late 1990s and early 2000s. He's also examining the decision by Crown counsel not to prosecute Pickton after an attack on a sex worker in 1997.

Pickton was convicted of six counts of second-degree murder, but the remains or DNA of 33 women were found on his farm. He claimed that he killed 49.