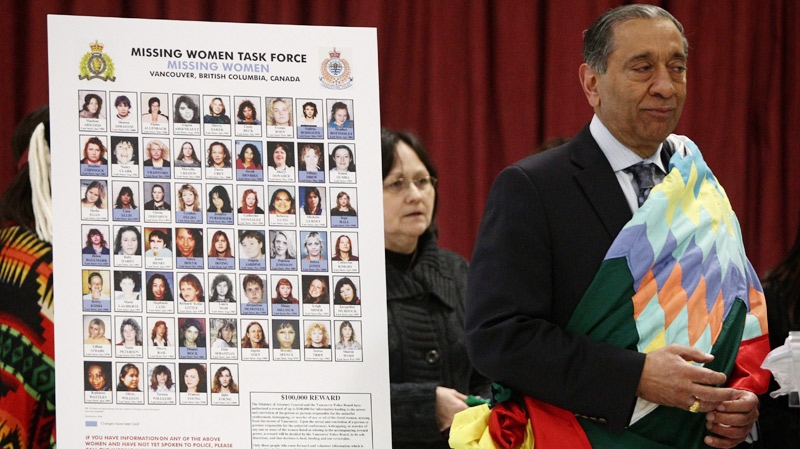 Commissioner Wally Oppal, right, stands next to a display with photographs of missing women after being wrapped in a ceremonial First Nations blanket during the Missing Women Commission of Inquiry public forum in Vancouver, B.C., on Wednesday January 19, 2011. (Darryl Dyck / THE CANADIAN PRESS)

Sex workers will be allowed to testify at the public inquiry into the Robert Pickton murder case without having their names published, the former judge overseeing the hearings ruled Thursday.

The witnesses also don't have to appear in person to be cross-examined by police lawyers.

Commissioner Wally Oppal granted an application to give sex workers and sexual assault victims a series of protections designed to encourage them to come forward. He said the value of their testimony outweighs concerns that the process would be unfair.

"I think the overall objective here has to be to encourage those people who feel marginal and who may feel intimidated by the process -- and we've heard ample evidence of that -- to come forward," said Oppal.

"I think it's in the public interest that they come forward and participate."

Jason Gratl, an independent lawyer appointed to represent the broad interests of the Downtown Eastside, put forward an application that included a number of measures to protect vulnerable witnesses -- all of which were adopted by Oppal.

Under the proposal, the names of sex workers and sexual assault victims will be covered by publication bans.

They will be allowed to provide evidence through written affidavits, preventing aggressive cross-examination by lawyers for the police, prosecutors or others.

Participants such as the police will be able to apply to cross-examine witnesses if they can demonstrate that's necessary, particularly for witnesses that allege wrongdoing. If Oppal decides a cross-examination is warranted, the witness would then have a choice: appear in person or withdraw their affidavit.

The Vancouver police, its union and the RCMP all opposed the application, specifically the blanket order allowing affidavit testimony.

They argued such measures should be determined on a case-by-case basis, and said it would be unfair to prevent them from cross-examining witnesses who are critical of police.

Oppal acknowledged it's an unusual setup, but he said allowing police lawyers to apply to cross-examine specific witnesses provides an adequate safeguard.

"This inquiry's main function is to listen to those people who have felt aggrieved by the system," said Oppal.

"I recognize that there are drawbacks ... but I think we need to make an exception in this case because of the vulnerability of those people."

Expert witnesses have spoken at length about sex workers' distrust of the legal system and their reluctance to speak to police, support workers in the Downtown Eastside and academic researchers.

The inquiry has already heard from one sex worker, outspoken advocate Susan Davis, but so far no others have offered to testify.

The hearings are examining why Vancouver police and the RCMP failed to catch Pickton in the late 1990s and early 2000s, and why prosecutors declined to pursue an attempted murder charge against him after an attack on a sex worker in 1997.

The inquiry is expected to continue well into next year, with a final report due by June 30, 2012.

Oppal is also conducting a less-formal set of hearings known as a study commission to examine broader issues surrounding missing women, including the so-called Highway of Tears in northern B.C.