Families of Pickton's victims to relive trauma at inquiry 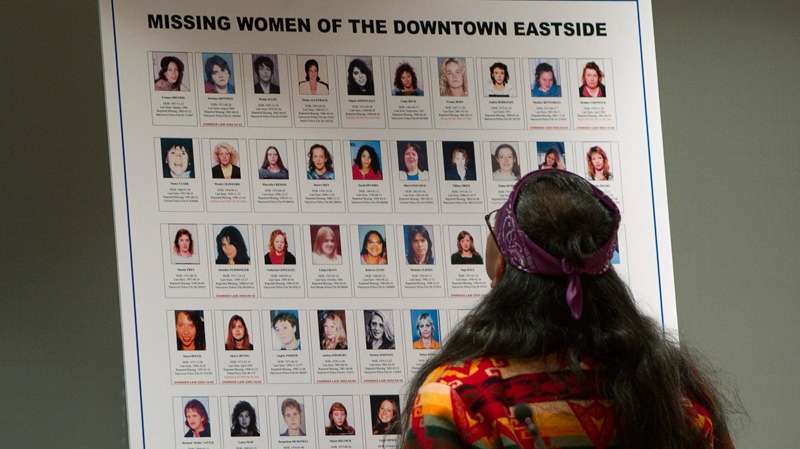 Elder Eugene Harry of the Squamish Nation looks at a poster of missing women prior to performing a ceremonial blessing at the start of the missing women inquiry in downtown Vancouver, Tuesday, Oct. 11, 2011. (Jonathan Hayward / THE CANADIAN PRESS)

It's been more than a decade since Lynn Frey visited the gritty streets of Vancouver's Downtown Eastside carrying a photograph of her stepdaughter Marnie.

Marnie disappeared from the troubled community in August 1997, becoming one of dozens of drug-addicted sex workers whose lives ended on Robert Pickton's notorious farm, and her death has never been far from her stepmother's mind.

In the 14 years since, Marnie's family has suffered through years of fruitless searching, news that her DNA was found on Pickton's farm, a gruesome trial in which he was convicted of her murder, and the serial killer's unsuccessful appeals.

Now, Frey and other relatives of Picktons' victims are preparing to appear at a public inquiry into why so many women died before the murderer was caught.

"I'm reliving the whole thing all over again," Frey, who is among the family members scheduled to testify next week, said in an interview.

"I've been reliving everything since 1997 when I started looking for Marnie. It hasn't all gone in the back drawer and closed. It's always been in the back of my mind."

The provincial inquiry opened earlier this month to examine why the Vancouver police and the RCMP failed to stop Pickton as he murdered sex workers in the 1990s and early 2000s, as well as Crown prosecutors' decision not to pursue an attempted murder charge against Pickton after an attack on a sex worker in 1997.

Commissioner Wally Oppal has so far heard from experts who have used broad strokes to paint a picture of the poverty, drug addiction and violence that defines life for sex workers in the Downtown Eastside.

Beginning Monday, those lives will come into sharp focus, as testimony shifts to the women who were murdered, their families and their interactions with the police.

"My main message for Wally Oppal is that this should have stopped a long time ago," said Frey. "There's no reason why all these women lost their lives when there should have been policies in place."

About 10 relatives are expected to appear at the hearings and their lawyers say their testimony will serve two purposes.

First, they will talk about how Pickton's crimes and the actions of police affected them, said Neil Chantler, one of the lawyers representing 18 of the families.

More importantly, Chantler said the families will describe what happened -- and what didn't happen -- when they went to the police to report their sisters and daughters missing.

"I think there will be quite a dramatic shift: We're going to be talking for the first time specifically about the police investigation in response to the women who were missing," said Chantler.

"We're going to be hearing from the families about what happened when those women went missing, the circumstances in which they went missing, and what the police did in the response."

Pickton was convicted of killing six workers, but the remains or DNA of 33 were found on his farm. The families of about 10 of those women are expected to appear at the hearings.

Lori-Ann Ellis, whose sister Cara Ellis is among the women Pickton was charged with killing but never convicted, said she's eager to tell her story.

"I think the big difference with being on the stand here is that everything we've said to the police, to everyone, to reporters has really fallen on deaf ears, and the information that we've given has been unable to initiate change," said Ellis.

"If everyone in this inquiry actually tells the truth, then we have a solid foundation in order to make change, to propose change and implement change."

Ellis has heard skeptics who have argued the Pickton case has been so exhaustively dissected that there is nothing left to learn from a lengthy and expensive public inquiry.

She bristles at the suggestion, insisting there are more details about the police investigation that have yet to come to light.

"We absolutely don't know everything," she said.

"When the world hears what happened with the families, the revictimization of the families through all of this, it's really going to open a lot of eyes."

Chantler and Cameron Ward are together representing a group of 18 families at the hearings, while Marion Bryce, the mother of Patricia Johnson, has her own lawyer.

Lillian Beaudoin, whose sister Diane Rock was among the six women Pickton was convicted of killing, said it's been invaluable to have other families to lean on through the trial and now the public inquiry.

"We give each other strength -- we have to," said Beaudoin.

"To be hearing the things that we've been hearing, it's devastating. It's just unbelievable, and we're able to sit and talk to each other how we feel."