Daughter once hated mom for dying at Pickton's hands 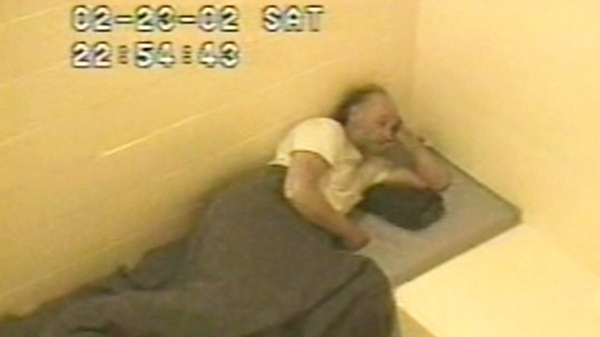 Robert Pickton is shown in a jail cell during a discussion with an undercover police officer in February 2002.

The daughter of one of Robert Pickton's victims told the inquiry reviewing the police investigation into the serial killer that she once hated her mother for dying in such a notorious way.

Angel Wolfe's mother Brenda Wolfe, was one of six women Pickton was convicted of killing in 2007.

Wolfe, now 18, told the inquiry she was just six when she last saw her mother and was eight-years-old when police visited the Toronto foster home where she was living to tell her that her mother had been murdered.

She began her testimony Thursday by reading a prepared statement to the inquiry that is examining why police failed to stop Pickton from murdering women on the city's Downtown Eastside.

Wolfe said she wasn't prepared for the graphic detail she was to hear in the media about her mom's death.

"I grew a hatred to my mother with no reason because -- at that time -- of what was being said in the paper, I didn't know what to be certain of," she said.

Wolfe said her foster home was in a "rich" area of Toronto, and once the media coverage began, local mothers didn't want their children associating with her.

As the trial coverage continued, friends even accused her of lying about her own life, she said.

Her foster mother didn't want to hear about the investigation and trial, so Wolfe said she kept her own scrapbook of newspaper clippings.

"Finally, I burned the book for my own healing," she said.

"The media and everyone wanted to identify these women as drug-addicted sex workers, not me. I see them as survivors," she added.

"I remember looking at the (missing women) poster for the first time and seeing the 69 different women. What I saw was hurt families, other people's mothers, sisters, aunties and friends."

On two separate occasions Wolfe, who's now a student living in Toronto, received rounds of applause from the audience that included family members of other Pickton victims.

Pickton was able to get away with murder because the women were from high-risk and marginalized communities and were already forgotten in society's eyes, Wolfe testified.

She called for more detox centres, treatment beds and aboriginal and community representation on a new police board.

Wolfe also called the disappearance of aboriginal women across Canada an atrocity and genocide.

"You've impacted all of us with what you've told us and how this horrible crime has affected you, and I just want to admire you for your courage, admire you for what you are doing," he said.

Liliane Beaudoin, the sister of Dianne Rock, one of Pickton's alleged victims, told the inquiry later Thursday that her family was devastated by the manner in which they learned of Rock's death from police.

Rock was one of 20 women who Pickton was charged with killing, but the Crown did not proceed with those charges after Pickton lost his appeal to the Supreme Court of Canada in 2010 for killing six women.

Beaudoin said police informed Rock's eldest daughter that Pickton had been charged in her mother's death on April 1, and she learned about the death during an April 2 phone message from her niece,

She said when she called Vancouver police to find out more information she was told the story would be on the news in half an hour.

Beaudoin said that didn't give her any time to notify any family members, and she was even forced to tell her own mother about Rock's death.

Beaudoin said one of her sisters in Alberta learned about the death by reading a newspaper.

"I felt it was very insensitive of them not to speak to us, not to let us know what was going on, not to say anything to us," she said. "It was very devastating to hear it the way that we did hear it."

She said she still has nightmares about her sister, too.

"Today, I continue to wake up in cold sweats, at times crying in my sleep from nightmares of my sister being cut up into bits and pieces and being fed to a swarm of hungry pigs," she said.

"I am awakened with dreams of my sister being dumped from a container clearly marked with skull and cross bones into a pit of slop at the rendering plant."

At the end of her testimony, Beaudoin refused to accept an apology offered by Tim Dickson, the lawyer for the Vancouver police and the police board.

It was the second time Thursday that a witness refused an apology from the police.

Earlier in the morning, Sean Hern, another lawyer for the Vancouver police and the police board, thanked Lorraine Crey for testifying, and told her his clients were sorry about her loss and hoped to provide her with answers.

The DNA of Crey's sister, Dawn, was found on the farm of serial killer Robert Pickton, although he was never charged with her murder.

"Sorry. (It will) take me take me time to forgive the VPD because I don't think sorry cuts it for me at this time," she said.

Pickton was originally charged with 26 murders.

The DNA of 33 women was found on Pickton's Port Coquitlam, B.C., pig farm, but Pickton's trial heard that he bragged of killing 49 women.