When Brice Royer was diagnosed with stomach cancer in 2012, he found comfort in a spiritually-conscious vegetarian restaurant near the Vancouver-Burnaby border.

After learning about his health problems, the husband and wife owners of Lotus Seed on Kingsway cooked him wholesome vegan meals on a nearly daily basis – and never charged him a cent.

"They always gave me free healthy meals. It was an amazing gesture. A kindness I really needed at that time," said Royer, who struggled with depression, fatigue and even suicidal thoughts at the time.

The couple was on his mind recently when he was brainstorming how he could pay an act of kindness forward to others on Christmas.

He reached out to the restaurant and told them he'd like to pay for everyone's meals on Christmas Eve.

"I said 'remember when you gave me meals almost every day? I'd like to do that.' [The owner] was like 'wow' and said he'd love to help," said Royer.

Boyer and the restaurant are offering to buy anyone who finds themselves alone on Christmas Eve a free holiday meal between noon and 5 p.m.

"All are welcome regardless of age, race or gender. Refugees, seniors, homeless – everyone," he said.

The charity app TangoTab, which provides a meal to a local person in need every time you dine out, will be used to pay for the meals.

So for Royer, the gesture is really a "win-win-win" because for every meal he buys, the app will work with a local food charity to provide another meal to people in the community. 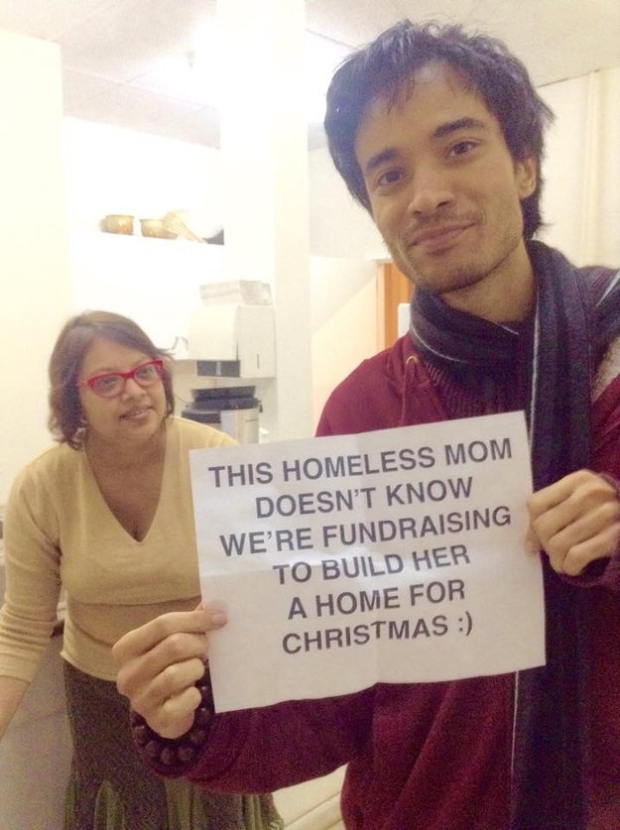 This is far from Royer's first kindness to strangers. In fact, he credits paying it forward to helping the tumour in his stomach to shrink.

"A doctor told me that love and kindness is the best medicine so I've been doing nice things every day since then," he said.

Those acts include paying for people's groceries, volunteering with local charities to giving out free hugs and giving encouraging notes to strangers. His Craigslist ad offering free "unconditional love" made headlines around the world.

Last year he raised $25,000 to build a small solar-powered house for a homeless mom and her four-year-old child.

Francesca Murray replied to his Craigslist ad asking for help around his home. She offered to cook for him, and that's when he learned she had been living in a shelter with her youngster.