Of B.C.'s 35 speed cameras, why is only one on Vancouver Island? 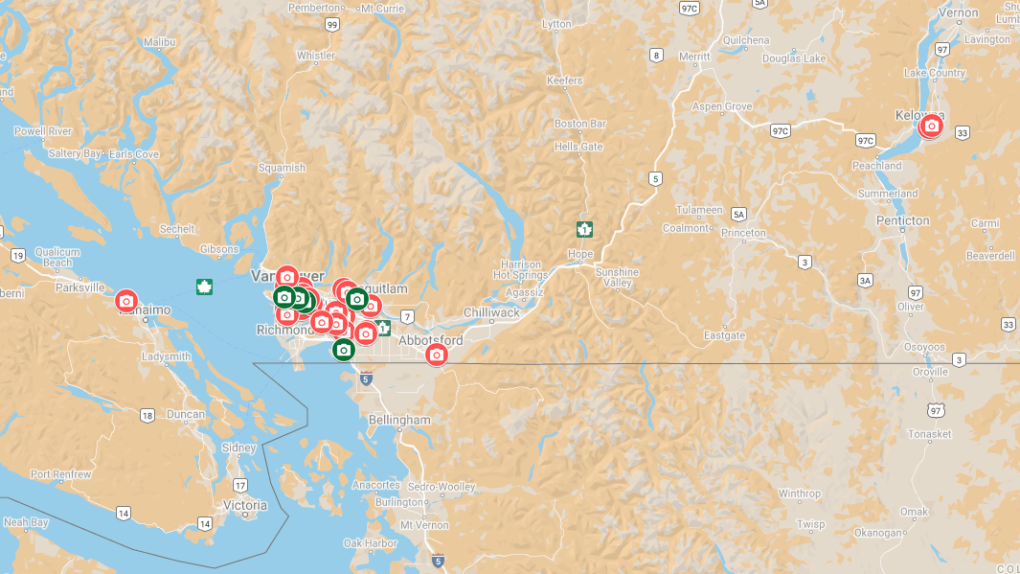 A map shows the locations of B.C.'s speed-detecting camera systems.

VANCOUVER -- Earlier this week, the province announced that all but one of the 35 previously identified intersections are now equipped with speed-detecting cameras.

Speed cams are now in place in cities including Vancouver, Surrey, Burnaby and Langley, among others.

Here's an interactive map of the locations.

While there are two cameras in Kelowna, the majority of the 35 intersections are in Metro Vancouver.

More than half are located in Vancouver and Surrey.

In addition to a lack of cameras in the Interior and up north, noticeably absent from the ticket-issuing camera program is the majority of Vancouver Island.

There is just one intersection on the island that will have the cameras capable of identifying speeding vehicles – Island Highway at Aulds Road in Nanaimo – and the technology won't go live there until September.

The province says this is because the speed limit was recently changed in the area, so officials are allowing a "grace period" before the system is set up.

But why only that one intersection?

The island overall has a population greater than that of Vancouver, a city with a dozen speed cameras installed.

The Ministry of Public Safety says the decision was based on information collected across the province.

There are 140 intersections with red light cameras in B.C., and the province collected speed and crash data from each of those.

Information gathered included each intersection's history and number of crashes that were fatal or caused serious injury.

Analysts also looked at how often people were caught speeding in the area, and how much higher than the speed limit they were alleged to have been travelling. They also looked at ways to reduce serious crashes, a spokesperson for the ministry said.

An analysis led to the identification of 35 locations the ministry said had "potential for further safety gains through automated speed enforcement."

Another factor was technical feasibility. Engineers looked at each intersection that was considered to make sure it was possible to add the enforcement measure.

When asked whether B.C. would see more of these cameras in the future, the ministry said the 35 sites will be monitored first.

The "road safety performance" will be evaluated before the ministry considers further rollout.

Wondering how the cameras work and where they are? More info in our coverage from earlier this week.