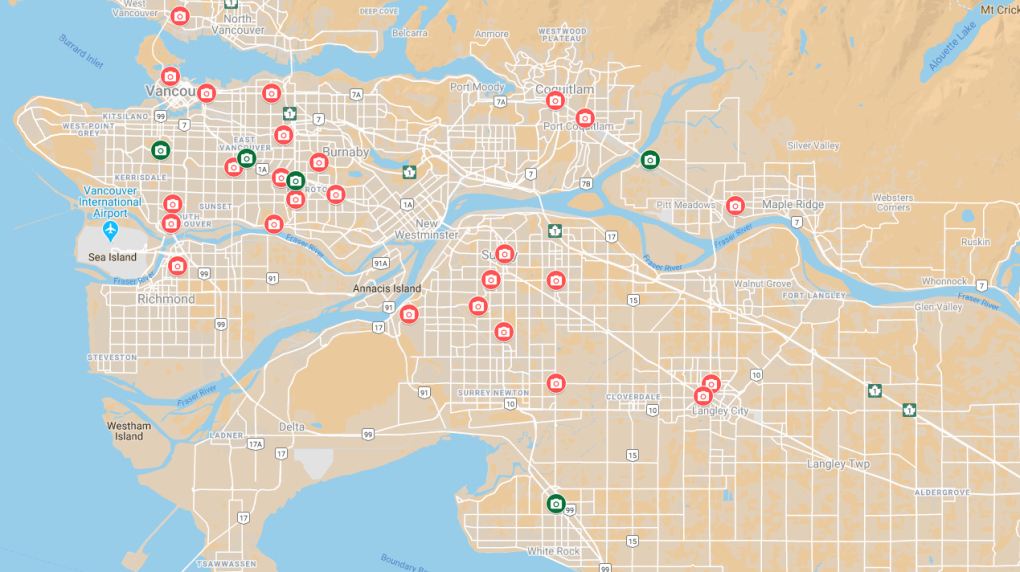 Some of the cameras capable of identifying speeding drivers are shown in a still image from Google Maps.

VANCOUVER -- A little less than a year after the province announced it was adding technology capable of issuing automated speeding tickets, all 35 B.C. intersections outlined at the time now have speed cameras.

The Ministry of Public Safety announced Wednesday the equipment has been installed at all of the intersection camera program sites, and that those cameras are currently working at 34 of them.

The final one, located on Island Highway at Aulds Road in Nanaimo, will go live in mid-September. The province describes this as a "grace period" to allow drivers to adjust to a recently reduced speed limit on that stretch of highway.

The speed cams are running 24/7, the ministry said.

B.C. first launched the program in July, when just five cameras were active. Since that time, a whopping 20,000 tickets have been issued by the new technology, the ministry says.

How does it work?

The province says the cameras capture images of the fastest vehicles as they speed by. They're installed at traffic lights, and are able to pick up whether a light is red, yellow or green.

Licence plates are captured by the cameras, and those images are reviewed by officers before tickets are sent out to a vehicle's registered owner.

Anyone who is ticketed would face a fine, but no penalty points.

The province noted anyone who is caught on camera speeding through a red light at one of the intersections would face fines for running a red and for speeding.

Where are the cameras?

Here's an interactive map showing all 35 locations, as provided previously by the province.

The ministry said previously that these intersections were identified based on speed and crash data, as well as information gathered from the province's 140 intersections that were already monitored by red light cameras.

The green camera icons show the initial five locations, while the remaining 30 made active in the last seven months are in red.

Wondering why there's only one on Vancouver Island? We asked the ministry.