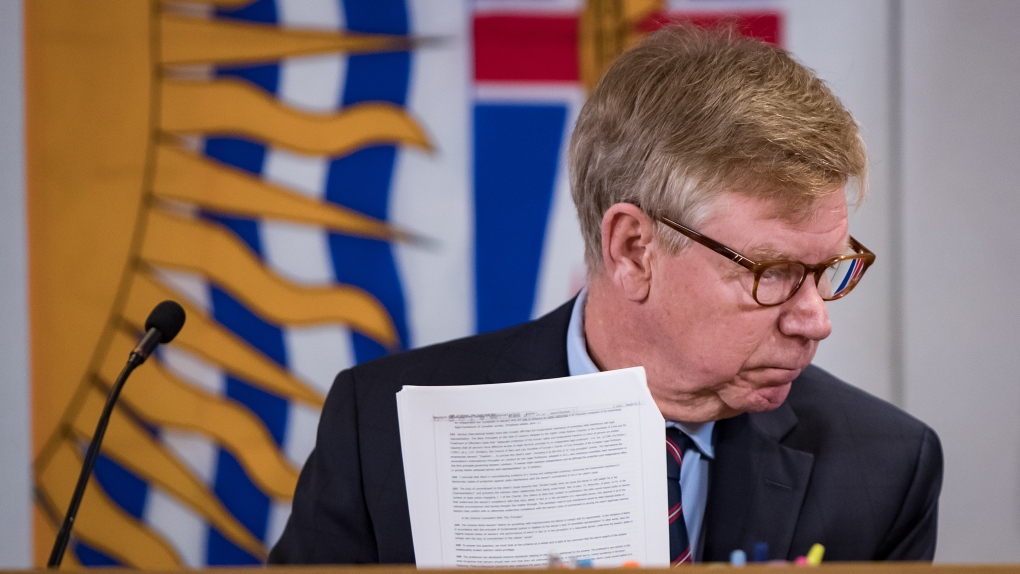 Commissioner Austin Cullen looks at documents before opening statements at the Cullen Commission of Inquiry into Money Laundering in British Columbia, in Vancouver, on Monday, February 24, 2020. THE CANADIAN PRESS/Darryl Dyck

The final report from British Columbia's public inquiry into money laundering is set to be submitted to the government today.

The New Democrat government appointed B.C. Supreme Court Justice Austin Cullen in May 2019 to lead the inquiry after several official reports concluded that hundreds of millions of dollars linked to organized crime and the drug trade had affected the province's real estate, luxury vehicle and gaming sectors.

The Cullen Commission's website says its mandate includes making findings of fact on the extent, growth and methods of money laundering in B.C. and whether the acts or omissions of regulatory agencies and individuals “contributed to money laundering in the province or amount to corruption.”

Since the spring of 2020, the commission heard testimony from about 200 witnesses over 130 days, including former B.C. premier Christy Clark, several former and current cabinet ministers, police officers, gaming officials and financial crime experts and academics.

Two senior gaming investigators testified that they raised concerns in 2009 with gaming and government officials, including cabinet ministers, about increasing amounts of cash in Vancouver-area casinos that they suspected was connected to organized crime.

Attorney General David Eby testified he appointed an independent review of money laundering at B.C. casinos after watching videos of gamblers picking up large bags packed with $20 bills outside casinos and bringing them inside the venues.

Eby, who will receive a copy of Cullen's report along with Finance Minister Selina Robinson and Solicitor General Mike Farnworth, says the government plans to release the report, but he didn't provide a date.

“I'm looking forward to the report,” says Eby. “Commissioner Cullen and his team worked very hard on it and heard from a lot of witnesses. I think it will be very helpful information for British Columbians about how we got into the mess we got into and also how we turn B.C. and Vancouver into a model for fighting money laundering instead of a centre where it takes place.”

This report by The Canadian Press was first published June 3, 2022.

The white father and son convicted of murder in Ahmaud Arbery's fatal shooting after they chased him through a Georgia neighbourhood were sentenced Monday to life in prison for committing a federal hate crime.