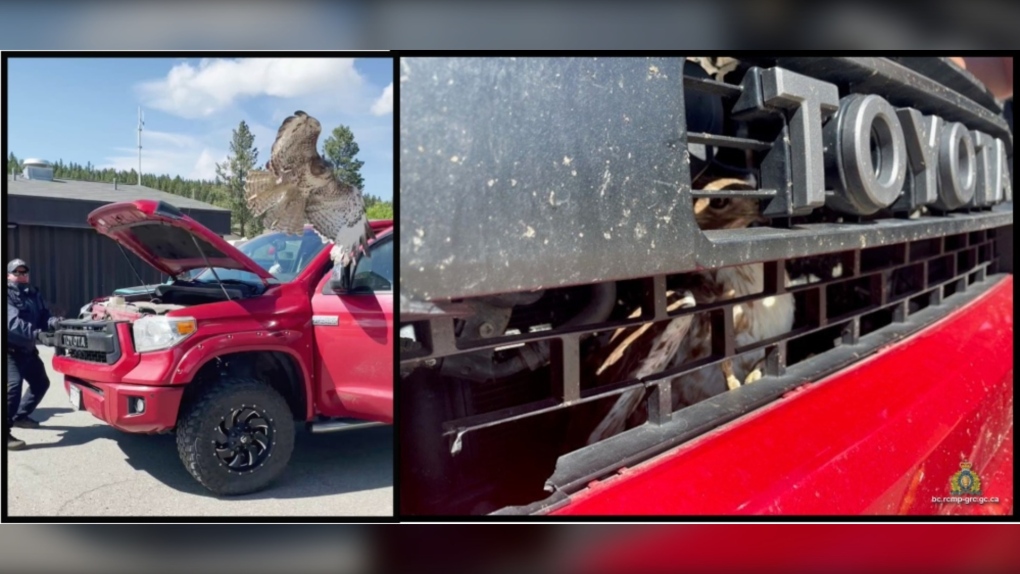 A picture of a large hawk caught behind the front grill of a pickup truck and the moment it flew away unharmed. (BC RCMP)
Vancouver -

Mounties in Clinton, B.C., rescued a large hawk caught in the grill of a woman’s pickup truck last week.

Last Friday, the woman pulled into the small detachment, which is northwest of Kamloops, to ask for help, Mounties said in a news release Tuesday.

Police say the woman told officers that the big bird had flown out of a ditch and right into her path on Highway 97, south of Clinton.

“Somehow the massive hawk managed to get trapped in behind the front grill of the woman’s Toyota Tundra,” says Cpl. Jesse O’Donaghey.

The bird was unable to escape by itself, say police. That’s when the RCMP came to the rescue.

As soon as Sgt. Brandon Buliziuk and Const. Marika Masters loosened the truck grill, the bird flew away. Police say the rescue was captured on video.

Seeing the huge amount of damage to the grill, officers were prepared to wrap the hawk in a blanket and rush it to an emergency vet, O’Donaghey told CTV News.

“I don’t think anyone quite knew what to expect to happen, and they were in awe of the size of the hawk and its ability to take to the skies so quickly,” added O’Donaghey.

The truck owner, Desiray Barr, posted the video on social media and says she could hear the bird screaming and scratching while it was trapped.

“I was sobbing of course,” Barr wrote on Facebook. “So glad she’s OK.”

A Maple Bay man told police after seeing the video, that the bird was a juvenile red-tailed hawk, a bird of prey well known to hunt alongside roadways in B.C.'s Southern Interior.

“This will no doubt be a story Const. Masters and Sgt. Buliziuk will share with their children and grandchildren in years to come,” says O’Donaghey.

As the federal party leaders make their final push to Canadian voters, new polling data suggests that the Liberals and the Conservatives are in a dead heat.