If Harry and Meghan moved to Vancouver, how much would security cost?

VANCOUVER -- A security expert estimates the cost of protecting the Duke and Duchess of Sussex could be around $10 million a year, although it's not clear whether Canadian taxpayers would be on the hook for the entire cost.

"I'm sure the U.K. government and Canadian government will work something out," said Chris Mathers, a former RCMP officer who now runs a private investigative and security firm.

"But one way or the other, somebody's taxes are going to be paying for this."

Mathers said the $10 million estimate is only a guess, and would include the "startup" costs of making a house highly secure, as well as ongoing security for daily activities, including transportation.

It's also possible the royal couple would pay the cost themselves, Mathers said.

The famous couple started the new year by announcing they'd like to divide their time between Britain and North America as they seek to quit their royal duties and become financially independent.

After Prince Harry met with the Queen and other family members to discuss how the arrangement would work, the duke and duchess have now moved closer to that goal.

On Saturday, Buckingham palace released a statement that said Prince Harry and Meghan Markle will no longer use the title of his or her royal highness, and would no longer receive public funds for performing royal duties.

Speculation is that the couple are leaning towards Canada's West Coast as their second home in North America: Harry, Meghan and their baby, Archie, vacationed at a mansion near Victoria over Christmas, and left Archie there in the care of a nanny while his parents returned to Britain.

Markle returned to Vancouver Island in early January, and then made two low-profile visits to the Downtown Eastside Women's Centre in Vancouver and the charity Justice for Girls, also in Vancouver. 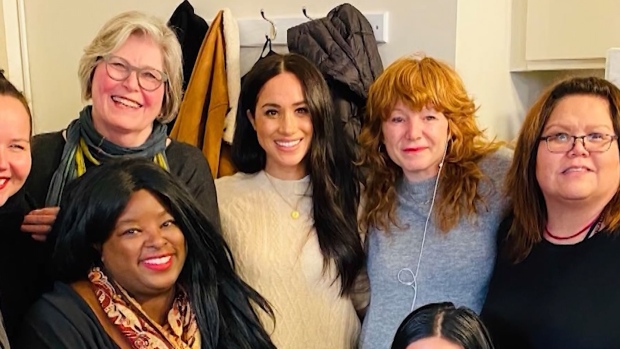 Citing various unnamed sources, the British tabloid The Sun recently reported that Markle had looked into buying a $35 million Point Grey home on the west side of Vancouver.

Daniel Tan, the realtor listing the home, told CTV News he had received some recent inquiries about the six-bedroom waterfront home – but not from "the royal couple."

Mathers said the reason security costs would be so high is that the duke and duchess are classed as internationally protected persons, meaning that "all nations agree to provide people with security when they visit."

However, the British newspaper the Times noted a sentence on the couple's website, "the Duke and Duchess of Sussex are classified as internationally protected people, which mandates this level of security," had been removed.

Another reason security costs would be high, Mathers said, is that the couple is likely the subject of numerous credible threats because of their fame and connection to Britain's Royal Family.

"There may be some combination of private security and RCMP; there usually is some kind of combination," Mathers said. "But armed security is what they require and the only people who can do that are law enforcement."

A recent poll conducted by the Angus Reid Institute showed that while Canadians like Prince Harry more than any other royal, that goodwill doesn't extend to the idea of spending public money to protect or house the duke and duchess.

Just three per cent of those surveyed said the government should pick up the entire tab for the couple, while 73 per cent said they should pay for their own security and other costs.

Buckingham Palace refused to comment on "the details of security arrangements," but the Jan. 18 statement did say the duke and duchess planned to pay back the publicly funded renovation of their residence in England, Frogmore Cottage, at a cost of C$4 million.