The out-of-control Keremeos Creek wildfire burning near a B.C. mountain resort continues to grow, and has shut down Highway 3A between Penticton and Keremeos.

The fire is now around 2,800 hectares in size, with flames that were clearly visible on the mountains to drivers in the area Tuesday.

“It is in difficult, treacherous-to-reach places,” explained Bryan Zandberg, a fire information officer with BC Wildfire Service. But he also said cooler temperatures are helping the effort to bring the blaze under control.

“Conditions are fairly favourable for us doing a much more direct attack on this fire. We’ve got crews staged, strung out, trying to contain this fire,” he explained.

More than 300 properties have been evacuated and hundreds more are on evacuation alert.

“We got the orders and threw everything we could into our vehicles and thought of what the kids would need and just left,” said Lindsay Tice, who was evacuated along with her young family.

“I know it came right up to the back side of our property and I feel awful to say, but we got lucky and the wind changed and our house didn’t burn down that day,” she said. “But from what I understand, it’s headed back up now.” 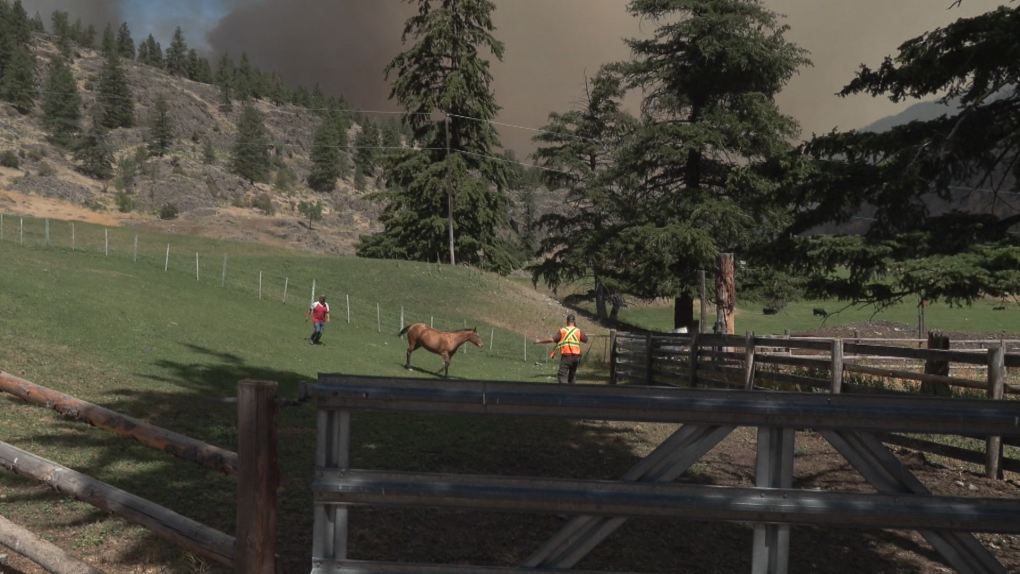 “I remember thinking there are certain areas of clear cut and that that should be a good fire break and then hearing that it jumped those fire breaks was really surreal and shocking. It was a false sense of security.”

Property owners have been trying to keep their animals safe and have also put up sprinklers to try and protect what they can.

“Not much you can do about it now. I mean we got everything out of the houses,” said Shawn Carter, whose property is under an evacuation order.

Dozens of properties have also been evacuated at Apex Mountain Resort.

“With (the fire) only being three or four km away, if the winds shift and winds can blow 30-40 km an hour, it could be on us in absolutely no time and we’re aware of that and doing all the preventive methods we can to protect ourselves,” said resort general manager James Shalman.

He said snow cannons are also being used to spray water on buildings and structures.

There are eight helicopters and 229 firefighters battling the blaze.

More favourable conditions Tuesday, including cooler temperatures, were expected to slow down the fire’s growth.

A year after the Taliban seized control of Kabul, Canada's resettlement efforts have lagged behind official targets and the efforts to help those fleeing the war in Ukraine. More than 17,300 Afghans have arrived in Canada since last August compared to 71,800 Ukrainians who have come to Canada in 2022 alone.

The Taliban on Monday marked a year since they seized the Afghan capital of Kabul, a rapid takeover that triggered a hasty escape of the nation's Western-backed leaders, sent the economy into a tailspin and fundamentally transformed the country.

An Iranian government official denied on Monday that Tehran was involved in the assault on author Salman Rushdie, though he justified the stabbing in remarks that represented the Islamic Republic's first public comments on the attack.

Why has polio been found in London, New York and Jerusalem, and how dangerous is it?

Polio, a deadly disease that used to paralyze tens of thousands of children every year, is spreading in London, New York and Jerusalem for the first time in decades, spurring catch-up vaccination campaigns.