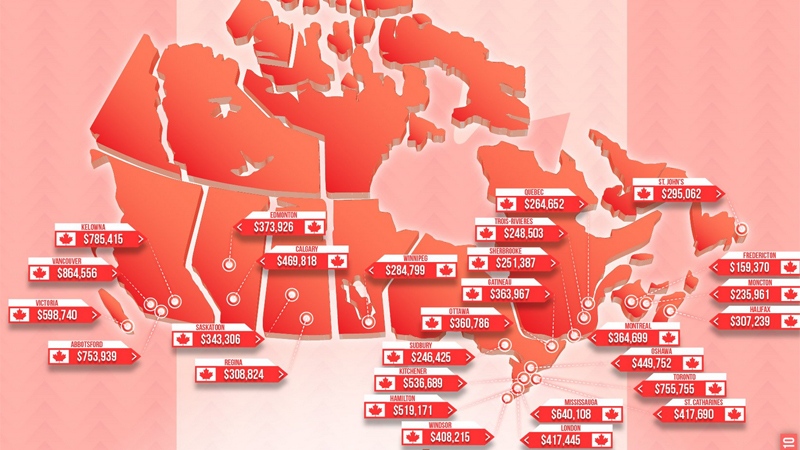 The price of homes in Canada's largest cities varies significantly less than south of the border. (RentSeeker.ca)

The price of homes in Canada's largest cities varies significantly less than south of the border, where Americans face an average anywhere from $86,000 to $3.3 million, new data suggests.

The data was released Thursday by RentSeeker.ca, one of Canada's largest real estate websites, and was created with information released by the Canada Mortgage and Housing Corporation and the Canadian Real Estate Association.

Unsurprisingly, the infographic shows that the average cost of a home in Canada this year was highest in Metro Vancouver, at $864,556. To afford a home in that range, Canadian families must bring home an annual salary of approximately $140,000.

Based on the latest census, the median family income in Canada is $78,870. The infographic suggests that those earning the median income can afford a house priced between $460,000 and $490,000 – slightly more than half of the cost of the average home price in Metro Vancouver.

Outside of Vancouver, the next most expensive Canadian market analyzed is in Kelowna ($785,415), followed by Toronto ($755,755). Abbotsford is fourth, and Victoria is Canada's sixth most expensive city based on average home price.

While the prices seem high, a move to some cities south of the border would cost homeowners even more. For sake of comparison, the below prices are listed in Canadian dollars (see note below for more information on conversion).

Just south of Vancouver, the average home price in Seattle is approximately $977,000.

The most expensive city in the U.S. that RentSeeker looked at is Saratoga, Calif., where the median home price is $3,305,158.

Recent statistics from the U.S. list the average annual household income as approximately $72,000. A family bringing in the median annual income could afford a home between $398,000 and $440,000.

The top five most expensive Canadian and American markets are as follows:

But heading south could also save Canadians some money, depending on where they chose to live. In some cities, like Detroit, the median home price is as low as $86,356.

The average home price in the Las Vegas area is only $377,934 Canadian.

The least expensive medians of the cities looked at are as follows:

RentSeeker looked at a sample of cities across Canada and the U.S. based on highest populations, but did not list costs in the Canadian territories because the information was not readily available through the CMHC.

Reporter's note: The above story has been edited to reflect that the Vancouver housing price is an average of all types of homes across the Metro Vancouver area. A previous version of this article stated incorrectly that the price was the median for detached homes only.

View a larger version of the graphic on RentSeeker's website.