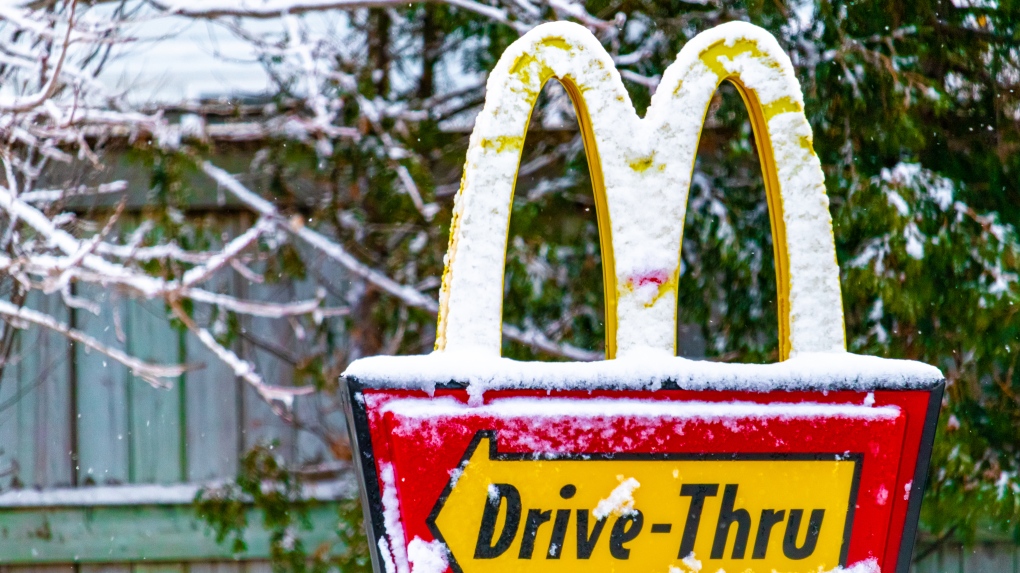 A snowy McDonald's drive-thru sign is seen in this undated image. (Shutterstock)

A B.C. driver who hit a wall in a snowy McDonald's drive-thru won't receive the payout he requested to cover damages and personal time.

The tribunal heard Jahromi's claim that Caterina was "negligent and failed to adequately maintain the snowy drive-through lane, which caused him to hit the wall." But Caterina claimed Jahromi's driving was the cause of the crash.

McCarthy said the decision was made based on the balance of probabilities, meaning one scenario was more likely than not.

"The undisputed evidence is that the Caterina drive-thru lane was snowy at the time Mr. Jahromi used it," McCarthy wrote.

"Mr. Jahromi says that his vehicle slipped, which caused it to strike the wall of Caterina's building."

McCarthy agreed that Caterina owed its customers a duty of care. Jahromi suggested the company should've cleared all the snow from the drive-thru and claimed $1,200 through the CRT to cover bumper repairs and "personal time" for speaking to various repair shops.

Caterina, however, said the drive-thru was safe to use even though it wasn't completely snow-free.

"Caterina says that 993 cars used its drive-thru that day, and there were no issues except for Mr. Jahromi’s collision," McCarthy's decision said.

"I find the lack of other proven incidents among the hundreds of cars using the drive-thru supports a finding that it was reasonably safe to use."

McCarthy further explained that Jahromi "submitted no evidence that supported Caterina's drive-thru being excessively slippery or presenting an unreasonable risk to its users in the circumstances."

The tribunal also received surveillance video from the company recorded on that day that showed the road was "straight and level."

"The ground was snowy, but the snow in the vehicle tracks had been compacted or moved to the sides of the lane," McCarthy wrote in his decision.

"There were vehicles both in front of and behind Mr. Jahromi's vehicle. I find the video does not show any of those other vehicles slipping or exhibiting significant difficulties."

McCarthy determined the video evidence didn't prove the drive-thru was unsafe and said the company didn't fail to keep up its standard of care. In fact, McCarthy said he found Jahromi's driving caused the crash.

"As Mr. Jahromi came to a stop at the pick-up window, he turned his front tires to the left, toward the wall adjacent to the drive-thru lane," McCarthy explained.

"He pulled forward slightly with the tires turned left, which moved the vehicle slightly left, before he came to a complete stop and picked up his food."

As noted from the video, the drive-thru lane was straight, but Jahromi's wheels were still turned to the left as he accelerated after picking up his food.

"On the evidence before me, I find that Mr. Jahromi struck the nearby wall because he left the pick-up window with his wheels turned sharply left, and because he accelerated too rapidly, especially considering the obviously snowy conditions," McCarthy said.

"I find this left him with no time to stop or turn and avoid colliding with the wall."

Hurricane Ian carved a path of destruction across Florida, trapping people in flooded homes, cutting off the only bridge to a barrier island, damaging a hospital from above and below and knocking out power to 2.5 million people as it dumped rain over a huge area on Thursday.

'Patience is wearing thin,' for Maritimers who question if utilities ready for storms

Some Maritimers who lost power for days after post-tropical storm Fiona are questioning whether power utilities have properly prepared their grids for the powerful storms that are increasingly battering the region.

A family doctor in Calgary has filed a human rights complaint over Ottawa's decision to no longer require masks on airplanes to prevent the spread of COVID-19.

NATO said Thursday it would retaliate for any attacks on the critical infrastructure of the 30-member-countries organization as it suggested that damage to two gas pipelines off Denmark and would-be member Sweden in international waters in the Baltic Sea is the result of sabotage.

Russia on Friday will formally annex occupied parts of Ukraine where it held Kremlin-orchestrated "referendums" in which it claimed that residents had voted overwhelmingly to live under Moscow's rule. The Ukrainian government and the West have denounced the ballots as illegal, forced and rigged.