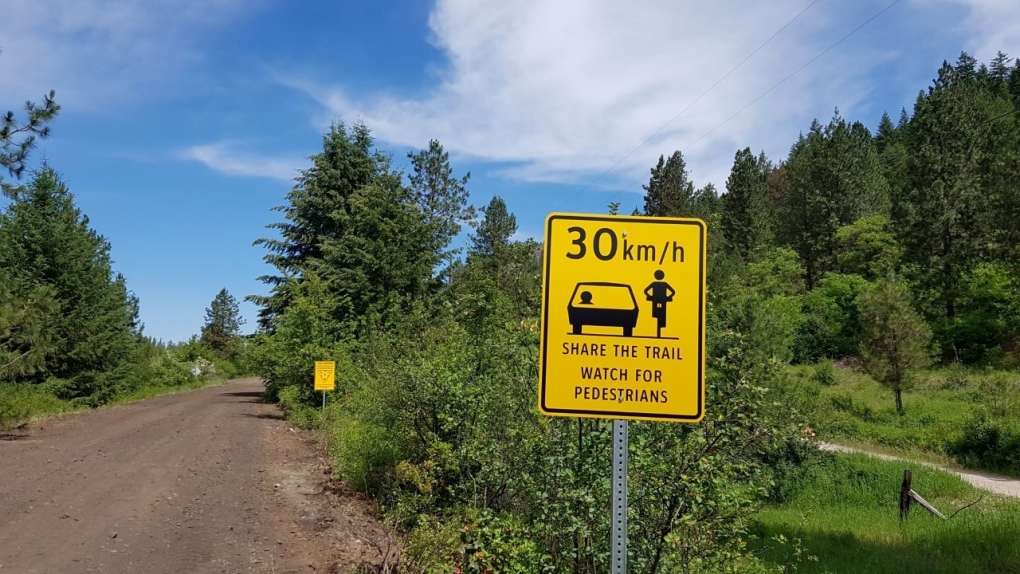 Léon Lebrun says motorized and non-motorized trail uses are "incompatible" on the same trail if the goal is a quality experience. (Facebook/TrailsBC)

British Columbia trail advocates are calling on the provincial government not to go through with its plan to change the designation of a popular hiking and cycling trail in the province's Interior.

In a letter to the Trails Society of BC last month, the provincial Ministry of Forests, Lands, Natural Resource Operations and Rural Development said it was considering cancelling the recreational trail designation on a 67-kilometre segment of the Columbia and Western Rail Trail.

The ministry describes the change as "administrative," noting that vehicles currently use the former railroad right-of-way between Castlegar and Fife as an access road.

"Public use and access are expected to remain as they have been if the change is approved," the ministry's letter reads. "The proposed change reflects local interests and supports access for industrial activity."

The problem, according to Léon Lebrun, a former president of the trails society and currently the chair of its southwest region, is that the vehicles that currently use the trail aren't supposed to do so.

"The province doesn't have the resources to regulate what goes on on the rail trail, and therefore have sort of ignored the fact that there are motorized vehicles accessing the trail." Lebrun said. "They have illegally accessed the trail. They're on there illegally at this point."

Under its current designation, the trail is intended for hikers, cyclists and equestrians. Motorized vehicles are not allowed, though they frequently use the trail anyway.

The trail makes up a portion of the Great Trail of Canada, formerly known as the Trans Canada Trail. Other parts of the Great Trail share roads with motorized vehicles, but Lebrun said that's not an ideal situation. Taking away one of the parts that is supposed to be engine-free makes that situation worse, he said.

"By doing that, they're creating a precedent," he said. "OK, every time that there's a timbre harvest company or whatever who wants to use the trail, they can just turn it into a road."

Instead of changing the designation of the trail, Lebrun said he would like to see the provincial government maintain the trail's current status. This could be accompanied by increased efforts to preserve the trail for its intended uses, he said.

The trail society is asking its members and other interested parties to contact the ministry and voice their opposition to the change. It has posted instructions for how to do so on its website and Facebook page.

Lebrun said the society supports designating specific trails for vehicle use -- either as roads or as recreational trails for off-road vehicles -- but those trails should be distinct and separate from trails like the Columbia and Western Rail Trail.

"We know that these two uses are incompatible on the same trail if we want people to have quality experiences on these trails," he said.