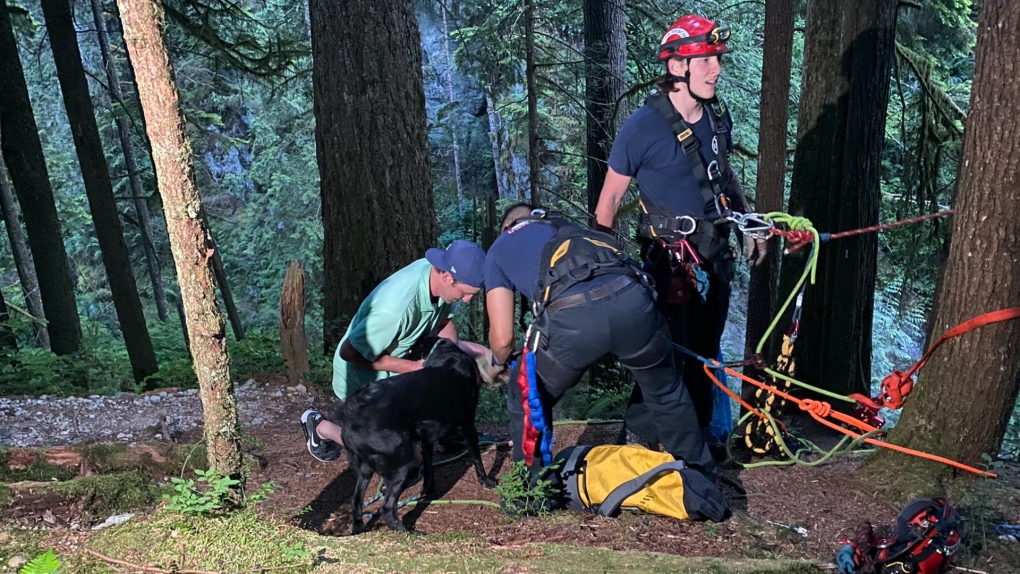 A dog named Stella was rescued off a cliff in North Vancouver on June 23, 2021. (DNV Fire Rescue Services/Twitter)

VANCOUVER -- A dog has been reunited with her owners after firefighters helped her from a cliff Wednesday.

Firefighters in the District of North Vancouver helped the black lab mix named Stella after she became trapped on a cliff near the Seymour River.

Crews say the dog had been chasing a ball when she got stuck. Stella was hoisted to safety and greeted by her owners.

Multiple similar dog rescues have taken place recently, after pups have gotten trapped in precarious spots while out with their owners.

A couple weekends ago, a woman and her dog were rescued from the frigid waters of Pitt River. Police say the woman had been walking with her pup along the trail between Ferry Slip Road and Fraser Dyke Road when her dog fell into the river and couldn't get out.

The pair was spotted trapped between two logs when someone called the RCMP for help.

And last month, a golden retriever slipped and fell over a waterfall in Golden Ears Park and was rescued by Maple Ridge firefighters.

Crews use ropes, a pulley system and brute strength to hoist the dog – named Rex – up a steep slope, over a fence, and onto a lookout platform next to the falls.

Not long before that, a dog got stuck on a ledge overlooking waterfall near Logan Lake. In that case, Mounties and the local fire chief helped seven-year-old Chevy from where she was trapped.

The B.C. SPCA recommends keeping dogs leashed at all times while on hikes, though some local trails permit dogs to be off-leash.