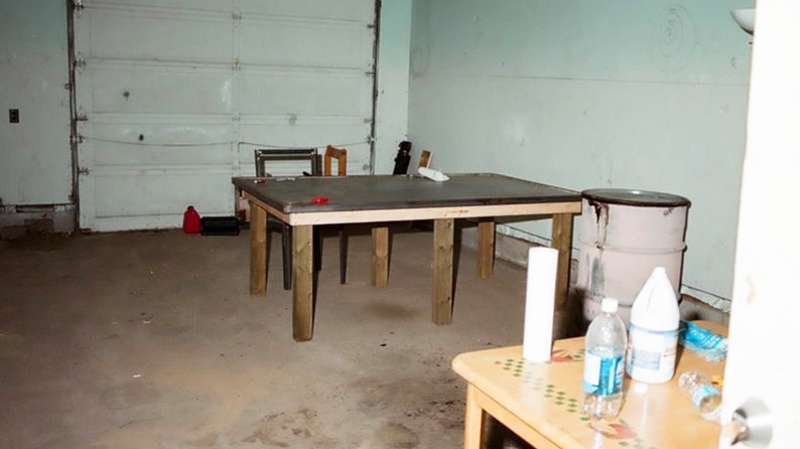 Prosecutors entered this photo of Mark Twitchell's garage into evidence at Twitchell' trial in Edmonton on Friday, March 18, 2011. (ho / THE CANADIAN PRESS)

An Edmonton man says he thought he was going on a date with a woman he had met on the Internet, but ended up in a fight for his life with a man wearing a hockey mask and brandishing a stun baton.

Gilles Tetreault is testifying at the murder trial of Mark Twitchell, who is accused of killing Johnny Altinger on Oct. 10, 2008, cutting up his body, burning the parts and dumping his remains down a manhole. Twitchell was an aspiring filmmaker and the Crown alleges he followed one of his scripts as he carried out the crime in a south Edmonton garage.

Exactly one week before Altinger disappeared, Tetreault, who is 36, said he went to the same garage thinking he was meeting a pretty blonde woman named Sheena, whom he had found on a dating site.

Soon his life was flashing before his eyes.

Tetreault said when he arrived at the garage, his attacker zapped him with a stun baton, pulled a gun and ordered him to lay face-down on the ground.

"I started tearing up. A lot of things were going through my head. When they say your life flashes before your eyes, that's what it was. My family. They may never see me again," he testified.

Tetreault said he was so scared he couldn't speak and feared the man in the hockey mask was going to rape or kill him.

"I decided I'd better fight back. I'd rather die my way to his way."

Tetreault says he scuffled with his attacker and then discovered the pistol being held on him was fake.

Emboldened by that, Tetreault looked for a weapon. He grabbed a pair of black handcuffs that were on the ground.

The attacker then started punching Tetreault, yelling at him to get back down on the floor of the dark garage.

Tetreault told the packed court how he managed to make it out of the garage, but his legs wouldn't work and he fell on the gravel driveway.

He testified that he gasped when the man in the hockey mask grabbed his legs and began dragging him back to the dark garage.

"Oh, no. How am I going to get away?," Tetreault remembers thinking. "I'm pretty much dead."

Tetreault said he managed to run away again and stumbled upon a couple who were walking their dog. He pleaded with them for help as the attacker approached, still wearing the hockey mask.

The attacker then tried to act like he was Tetreault's friend, and gestured like he was going to remove the hockey mask, but instead turned around and walked away.

Many of the details Tetreault described match those noted on a deleted file police found on Twitchell's computer. In that file the author talks about becoming a serial killer. The Crown argues the file is Twitchell's diary. A week later, they allege, Altinger was lured to the garage in a similar fashion, but did not escape.

When Tetreault got back home, he said he checked Sheena's Internet dating profile, but it was no longer on the website.

He said he only contacted Edmonton police on Nov. 2, 2008, after a friend told him about a news report about Twitchell being charged with first-degree murder.

Twitchell has pleaded not guilty.