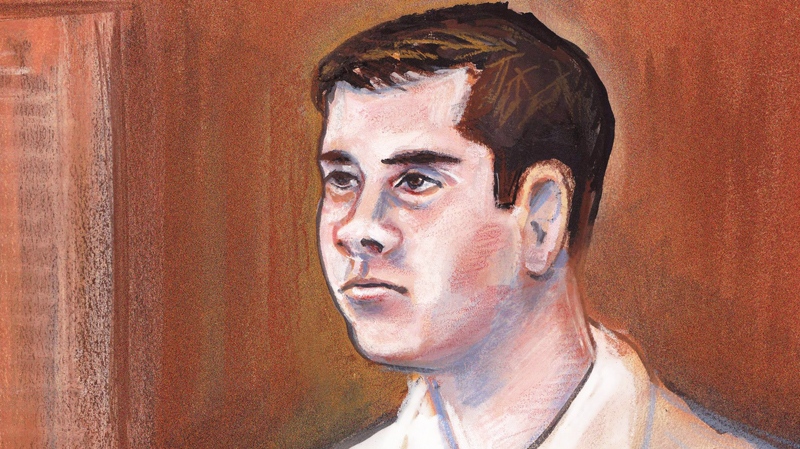 Filmmaker Mark Twitchell cried in court Friday as he watched a police interrogation video of a detective telling him he was going to be charged with homicide.

"You've changed your whole story. All kinds of different lies," Det. William Clark is seen telling Twitchell on the 2008 tape played for jurors.

"It's time for you to step up to the plate.

"You're not gonna be able to live with yourself -- with this -- for the rest of your life."

On the tape, Twitchell, with his head down, mumbles, "You'd be surprised what I can live with."

The 31-year-old filmmaker is in Court of Queen's Bench charged with the first-degree murder of B.C. resident Johnny Altinger on Oct. 10, 2008.

The Crown says it will prove that after Twitchell made a short, low budget slasher film in a rented residential garage in southside Edmonton, he lured Altinger there two weeks later and killed him the same way as in the script.

They say he knifed Altinger to death, cut up and burned the body, dumped the charred remains down a sewer, then chronicled the whole affair in a diary he called "my progression into becoming a serial killer."

The six-man, six-woman jury has heard that Altinger had gone to the rented garage that Friday night expecting to find a woman named Jen, whom he had met on an Internet dating Website.

As a precaution, he had sent a friend the directions to the garage.

Days later, friends hadn't seen him but did get emails in his name saying he had quit his job and run off to Costa Rica with Jen.

Suspicious, they called police and eight days after Altinger's date police officers met up with the man renting the garage -- Mark Twitchell.

Twitchell told them he'd never met nor heard of Altinger, but did recently buy a car for $40 from a stranger who told him he was going to the Caribbean with a wealthy woman.

The car was Altinger's red Mazda 3.

For the next 48 hours police put Twitchell through the wringer in a series of interviews, making him tell his story, then re-tell it, then tell it backwards. Gaps and inconsistencies emerged.

It was 5 a.m. on Oct. 20 at the downtown police station when Det. Clark had heard enough.

Time to press the issue.

"As soon as we're done interviewing everybody else we'll be coming back to charge you. It's just a matter of time," he tells Twitchell on the black-and white-video, played on a two-metre high screen before a packed gallery.

Twitchell, in jeans, jacket, and sneakers and sitting on a couch, appears confused.

"I feel like I'm in the twilight zone right now," he says.

If you want a lawyer, call one, says Clark.

Clark presses on, praising Twitchell as a smart guy and suggesting Altinger's death was accidental or provoked.

He does not browbeat Twitchell, but alternates between stern father and father-confessor.

But he is relentless.

He comes at Twitchell with accusations, probing for a weak spot, looking to engage his conscience.

"It's not going away. It's just starting to build."

Clark circles back repeatedly to Twitchell's wife and eight-month-old child.

"What's going to happen with your daughter? I know that's weighing on your mind," he says.

"It's not the end of your family's life. I'm sure you're still going to want to see your daughter one day."

It was during those moments on the tape, the references to his family, when Twitchell appeared to break down in court, blinking back tears, biting his lips, wiping his eyes, putting his head on the table.

It created surreal moments: the on-screen Twitchell holding his head in his hands and crying while the real-life Twitchell sat a beside his lawyer at the defence table doing the same.

On the video, Twitchell, hand over his forehead and looking down, fights back.

"Is anything you're saying genuine, or is this some sort of tactic?" he asks.

Clark shoots back: "Get out of your film producer mode and the facade of thinking that everyone's an actor.

"This is real life, all right. Real life."

Clark hammers away. The forensics team is going to go through your garage, and your car, he says. Come clean. Get it off your chest. It's not your fault. You can't live with this.

Twitchell admits he's tired, that his marriage is likely lost, and that he's surviving on fear and adrenaline.

"Do you know what it's like living with constant apprehension?" he asks.

"I'd like not to feel that anymore," says Twitchell.

Clark explains the degrees of homicide to him: first degree, second degree, manslaughter.

"What's the category for suicidal?" asks Twitchell. "Because, what's the point, I mean if everything I've been working for is just suddenly gonna end?"

Don't do it, says Clark.

Twitchell finally agrees it's time to get a lawyer.

Eleven days later, on Halloween, he was arrested.