The number of schools on COVID-19 exposure lists in B.C.'s Lower Mainland continued to decline this week, reaching its lowest level since early October.

The drop was driven by Fraser Health, which continues to account for the vast majority of school exposures in the Lower Mainland. There were 104 schools on the health authority's list as of Friday, down from 123 the previous week. 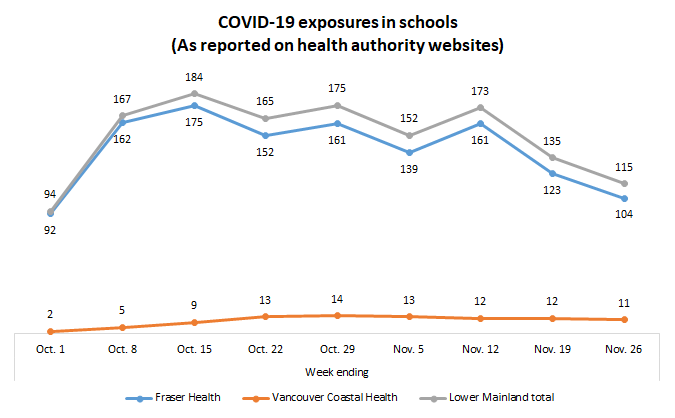 Vancouver Coastal Health had just 11 schools on its list, and two of them are located on B.C.'s Central Coast, well outside the Lower Mainland.

Schools are added to the lists when a student or staff member tests positive and officials believe there is a risk of ongoing transmission to other members of the school community.

Exposure notifications are not posted for every case of COVID-19 associated with a school community, and schools are not added to the health authority lists until after close contacts have been notified directly by public health officials.

Earlier this week, health officials announced details of the province's plan to vaccinate children ages five to 11 against COVID-19.

According to provincial health officer Dr. Bonnie Henry, children under 12 account for about 20 per cent of B.C.'s COVID-19 cases, despite making up roughly 10 per cent of the total population.

Nearly 3,000 school exposure notifications had been issued at 835 different schools across the province from the start of the fall semester to Nov. 6, according to Henry.

About 12 per cent of schools in the province saw clusters of cases with in-school transmission, which the provincial health officer framed as evidence of the system working as intended.

"In 88 per cent of our schools across this province, we have not had any transmission events," she said at the time. "I think that's good news … It tells us what's happening in the schools is working to support children."

The median number of cases associated with clusters has increased this school year, going to three from two, which officials blamed on the Delta variant.

Henry also noted that a recent B.C. Centre for Disease Control investigation of school clusters found that most coronavirus transmission among school-aged children happens in the community or at home, rather than at school.

The declining number of school exposure notifications in the Lower Mainland comes alongside declining infection numbers across the province. On Friday, the rolling seven-day average for new cases confirmed in B.C. dropped to 352, the lowest it's been since Aug. 8.