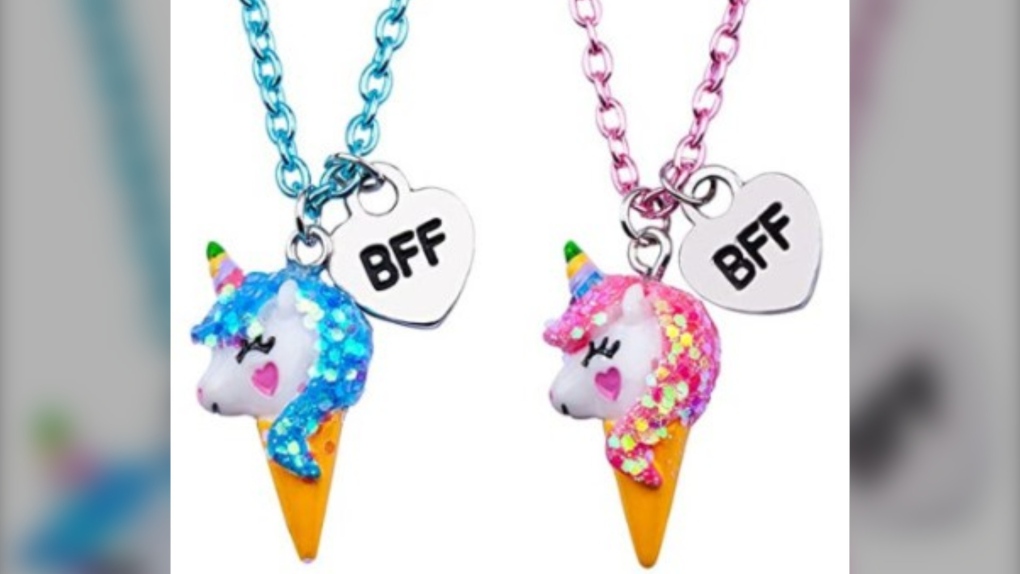 VANCOUVER -- A pair of necklaces are being recalled in Canada after being found to contain too much of a toxic chemical element, federal officials say.

In a recall notice posted earlier this week, Health Canada said the unicorn necklaces were found to contain cadmium "in excess of allowable limits."

Under federal regulations it is illegal to import, advertise or sell jewelry meant for children if the items contain more than 130 mg/kg cadmium, the agency said in Thursday's recall notice.

Both metals are commonly used in costume jewelry, as they're soft and inexpensive. Health Canada says wearing the jewelry is considered safe to wear, but sucking, chewing on or swallowing it can have a harmful effect on children, or even cause death.

"One of the big challenges with lead is that it has a sweet taste, which can encourage kids to put it in their mouths," Health Canada said.

A range of serious side effects are associated with the metals, the agency said, ranging from vomiting and diarrhea to coma, convulsions and serious brain injury. Some children may experience kidney, liver, heart or immune system damage.

The recall applies to a pair of necklaces that feature charms with unicorn heads on ice cream cones. Each necklace has a charm attached with the letters "BFF."

The Amazon ASIN number is B07D3KD95H. The necklaces are made in China and distributed by DongGuan City TianHui Food Co. Ltd.

Parents or guardians who have the products can just throw them away with their regular garbage.

This notice is for girls' necklaces and matching bracelets with button and bird charm pendants, made by Quebec-based Baluchon Accessories.

These pieces were also found to contain cadmium in excess of allowable limits, as well as lead.

About 720 were sold in Canada between February 2015 and this January, Health Canada said.

Those in possession of the jewelry are told to take it away from children, then contact Baluchon for an exchange. The company can be reached by phone at 819-472-7272 or by email.

The agency's advice to parents includes that children are not given any adult jewelry to wear or play with, and to monitor recalls and safety alerts.

When it comes to inspecting items a child already has, those with a high percentage of the metals are often heavy for their size, Health Canada says.

Parents of children who have regularly sucked or chewed on jewelry that may contain one of the metals are advised to contact their doctor for a blood test.

If their child has swallowed something that may contain the metals, they are at high risk of developing serious or even life-threatening health effects, and parents should seek emergency care immediately.