Chicken served in restaurants, hospitals and nursing homes could be contaminated with listeria 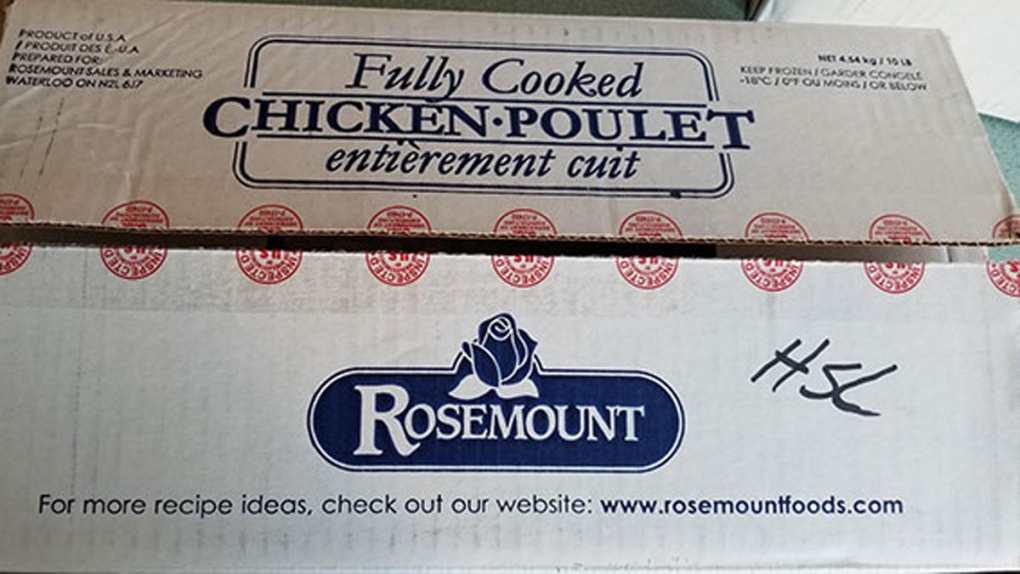 A box of Rosemount cooked chicken is shown in an image provided by the CFIA.

Federal health officials have issued a recall on a brand of pre-cooked chicken due to possible contamination with a bacteria that can cause serious illness.

The affected product may be served in hotels, restaurants, cafeterias, hospitals and nursing homes, the recall warns.

The warning issued over the weekend applies to Rosemount cooked diced chicken, which comes in a 4.54-kilogram package.

The agency did not provide a list of specific locations where the meat may have been served, but the product is known to be distributed in B.C.

It may also have been served in Alberta, Saskatchewan, Manitoba, Ontario, Quebec and Nova Scotia, the warning said.

It's possible the recall will be expanded to include other provinces as the investigation continues.

The CFIA probe was triggered by a foodbourne illness outbreak in B.C., Manitoba and Ontario.

The Public Health Agency of Canada said many Canadians deemed to have a listeria monocytogenes infection either lived at or had visited institutions where the product was sold before falling ill.

As of Sunday, only one case was reported in B.C. One person in Manitoba got sick, and five in Ontario fell ill.

Institutions that serve the chicken have been advised not to sell it, and the CFIA is working to confirm those in the industry are aware and are no longer serving it.

Those who think they may be sick from a recalled product are advised to contact their doctor.

It is particularly dangerous to pregnant women and people with weakened immune systems.

Food contaminated with listeria may not look or smell spoiled.