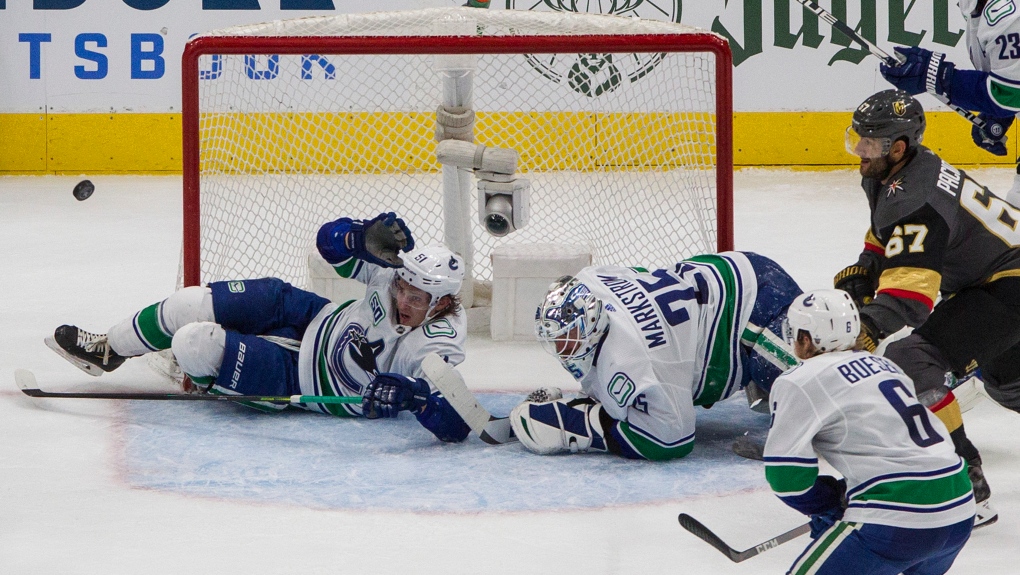 VANCOUVER -- To gauge the Vancouver Canucks' chances of taking the series lead against the Vegas Golden Knights, just trace your finger down the list of blocked shots.

On Tuesday, for the first time in the playoffs, almost the entire Canucks' bench bought in, with 16 of 18 skaters throwing themselves in front of a hail of vulcanized rubber to help goalie Jacob Markstrom preserve a 5-2 win over the Golden Knights.

That evens the best-of-seven NHL playoff series at one game apiece, with Game 3 set for Thursday at Rogers Place.

“It lifts the bench up, for sure. You can hear it on the bench when guys block shots,” Vancouver head coach Travis Green told reporters on a Zoom call Wednesday.

“You don't win if you don't have certain elements in your game, and sacrifice and will are part of it for sure at this time of year.”

The Canucks, coming off a 5-0 drubbing in Game 1, jumped out to a 2-0 lead against the Golden Knights in Game 2 Tuesday before the real shooting started.

The second period was played almost entirely in Vancouver's end, with the Knights cycling the puck and shooting, reloading and blasting away again. After 60 minutes, the Golden Knights had 93 shot attempts: 40 shots on goal, 40 blocked and 13 missed altogether.

They managed one goal for their efforts in the second period, but then gave up a late period goal to Elias Pettersson, which Vegas coach Peter DeBoer called “a back-breaker.”

The Canucks have been upping their blocking game as the playoffs have progressed. Against the Minnesota Wild, no more than nine Canucks a night blocked shots. That number went up to an average of 11 against the St. Louis Blues.

Against Vegas, 12 players took the rubber in the Game 1 debacle, while everyone but Adam Gaudette and Brock Boeser weathered at least one shot in Game 2.

Veteran defencemen Alex Edler and Chris Tanev lead the way - by a longshot. The pair have combined for 83 of the 250 blocked shots faced in Vancouver's 12 playoff games (45 for Edler and 38 for Tanev). One-third of every blocked shot is going off one of them.

“They lead by example and it's not just once in a while, it's every day.”

Golden Knights' forward Mark Stone said if the Canucks keep selling out to block shots, they'll just have to find a way to shoot 'em where they ain't.

“The quicker you move the puck, get them moving, that's when you create (shooting) lanes.”

Knights' forward Jonathan Marchessault said they also have to clean things up at their end of the ice. Pettersson, Bo Horvat and Tyler Toffoli torched them for four goals and eight points Tuesday, exposing goalie Robin Lehner to multiple point-blank scoring opportunities.

“We definitely gave them a lot of room,” said Marchessault. “Their skill players, they were coming into our zone like nothing. It was too easy for them.

“It's on us to go back to how structured we were in the first game.”

The Canucks need to worry about shot fatigue on Markstrom.

Markstrom has started all 12 playoff games, getting pulled late in the Vegas Game 1 loss for Thatcher Demko. In that time, Vancouver has been outshot by an average of 36-28, and has yet to outshoot an opponent in the return-to-play tournament (they tied Minnesota in shots twice). The Golden Knights have put 79 shots on net in just two games.

The Knights, meanwhile, grappled with their second social media controversy in four days. After Tuesday's loss, Marchessault got into a word war with people on his Instagram page, firing off some profane ripostes to those accusing him of exaggerating how hard he gets hit, known as diving.

“I just wanted to apologize, sincerely,” said Marchessault. “I think it was childish. It was immature, not professional.

Golden Knight Marc-Andre Fleury, the regular season starting goalie, has seen very little ice time in the playoffs, prompting his agent to post a Twitter meme over the weekend of Fleury, on ice in his uniform, being literally stabbed in the back with broadsword bearing DeBoer's name.

Lehner has started the first two games of the Canucks series, but the 5-2 loss raised questions on whether Fleury may be between the pipes in Game 3.

DeBoer declined to discuss the specific plan but said “both guys are going to play as we move forward here.”

This report by The Canadian Press was first published August 26, 2020.