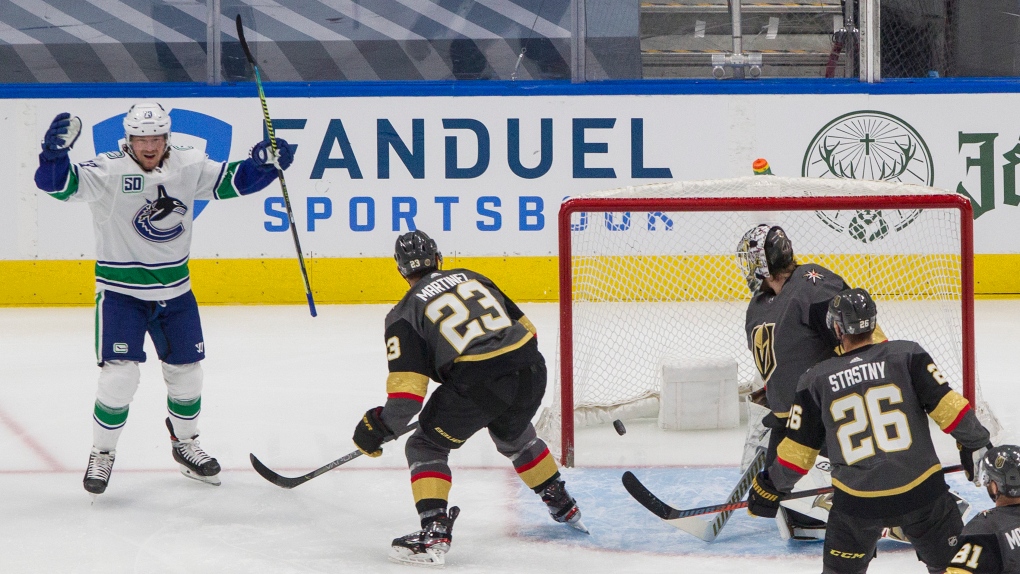 VANCOUVER -- The Vancouver Canucks, coming off their worst performance of the playoffs, delivered one of their best efforts of the post-season Tuesday, stopping the Vegas Golden Knights juggernaut in its tracks.

Bo Horvat scored twice, and Tyler Toffoli and Elias Pettersson each had a goal and two assists as the Canucks defeated the Golden Knights 5-2 at Rogers Place.

Forty-eight hours earlier, the Golden Knights, now 8-2 in the post-season, had manhandled the Canucks en route to a 5-0 pounding in Game 1.

“For us as a team we wanted to bounce back from Game 1. We weren't happy with that,” said Pettersson.

“We played a good game. We should be happy about it but (we need) a short-term memory and be ready for Game 3.”

Goaltender Jacob Markstrom made 38 saves for the win while Robin Lehner stopped 22 shots for Vegas. It's the first time Vegas has allowed more than five goals in a game in the return-to-play tournament.

It was the first game back for Toffoli since the opening game of the qualifying round against the Minnesota Wild on Aug. 2. The NHL is not releasing information on injuries, but Toffoli had been seen in a walking boot.

Toffoli jumped over the boards for his first shift in the first period and scored nine seconds later, taking a cross-crease pass from Pettersson to put the puck into a yawning net. He then made it 2-0 on the power play, delivering a tape-to-tape pass to an incoming Horvat, who blasted it past Lehner.

“It's fun to get back in the lineup and get a big win and tie this series up,” said Toffoli, who had been acquired at the trade deadline from the Los Angeles Kings. He had put up 10 points in his first 10 games with the Canucks before the regular season ended March 12 due to the COVID-19 pandemic.

“I made some phone calls yesterday, talked to a lot of people. It was a busy day,” said Toffoli. “It was good obviously getting the OK from everybody (to play). I got all excited. Felt like I was coming back to my first playoff series.”

Vancouver coach Travis Green said the 5-0 loss was their worst game of the playoffs and that Game 2 was a must-win.

“You go down two (games) against that team early in the series it would be tough and just mentally, too (to come back),” he said.

Despite being down by two goals in the second period, the Golden Knights looked like they were going to run the Canucks out of the rink again.

Markstrom kept the Canucks alive as Vegas tilted the ice and turned his net into a shooting gallery, blasting away for 22 shots in the period. Vegas got one goal back from Alex Tuch before Pettersson scored on a cross-ice feed from Alex Edler to make it 3-1 heading into the third.

“That really was a back-breaker,” said Vegas head coach Peter DeBoer. “You're down 3-1 and you have nothing to show for the work you put in to try and get back in the game.”

Tuch added: “We knew Vancouver wasn't happy with the way they played last game and we knew they were going to come out flying. And we decided instead of being prepared, (to) be surprised by that for some reason.”

Vancouver iced the game 18 seconds into the third on Horvat's second goal. Then the frustration finally got to Vegas.

First, Max Pacioretty grabbed J.T. Miller by the head and threw him down after the whistle for a roughing penalty. Tuch got a double minor for pummelling Jake Virtanen while the Vancouver forward lay on the ice.

Horvat had not found the scoresheet since scoring two goals in each of the first two games against the St. Louis Blues in the first round.

Pettersson has been a steady point-getter throughout the playoffs but had been shut down by Vegas in Game 1, limited to no shots on net and one blocked shot.

Markstrom, in his first playoff series, has been the locomotive pulling the Canucks' playoff train. He allowed just nine goals on 121 shots (.926 save percentage) against Minnesota in the first round while registering his first playoff shutout. He saved 29 of 34 against the Blues (.930).

The series is being played at a fan-less Rogers Place. Players are isolating between contests to prevent the spread of COVID-19.

This report by The Canadian Press was first published August 25, 2020.