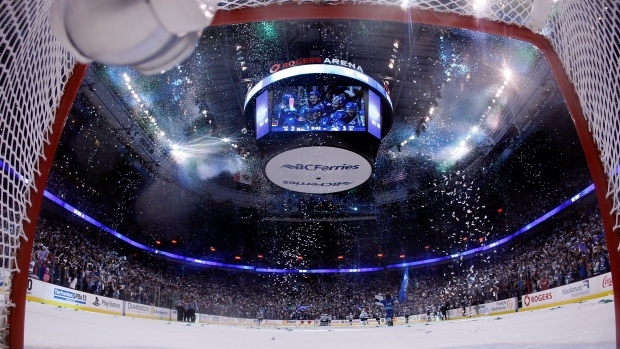 Rogers Arena in Vancouver, B.C., is seen in an image from Getty.

VANCOUVER -- A staff member of Canucks Sports & Entertainment has tested positive for COVID-19.

Trent Carroll, COO of the Vancouver Canucks' parent company, said the diagnosed individual was in self-quarantine and feeling better.

“The individual does not have a fan-facing role and is not in contact with the players, hockey operations personnel or Rogers Arena part-time events staff. Therefore the Public Health Authority has confirmed the public risk of exposure is low,” Carroll said in a statement.

“Anyone who may have had contact with the individual have been notified and are also observing self-quarantine for precautionary reasons,”he added.

The organization closed its offices Monday and employees were preparing to work from home “wherever possible.”

“We are receiving guidance from the health authorities on next steps,” said Carroll.

This report by The Canadian Press was first published March 16, 2020.