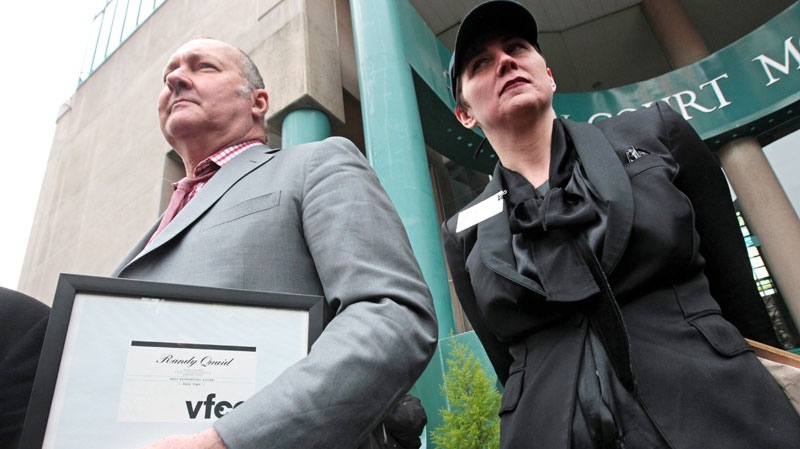 U.S. actor Randy Quaid, left, holds a Vancouver Film Critic's Circle Award he was presented with for the 2009 Canadian film 'Real Time,' as he stands with his wife Evi during a news conference in Vancouver, B.C., on Wednesday February 23, 2011. (Darryl Dyck / THE CANADIAN PRESS)

The Santa Barbara District Attorney's Office has submitted a request to have actor Randy Quaid and his wife Evi returned to the United States.

The couple fled to Vancouver last year after facing felony vandalism charges for squatting in the Montecito, California home they once rented.

Senior Deputy District Attorney Lee Carter said his office is asking the Department of Justice to make an application to have the couple brought back to face the charges.

The Quaids are both wanted under $500,000 bench warrants in Santa Barbara. Neither the actor or his wife have appeared at any court hearings in the case.

Evi Quaid, 47, begged a Canadian immigration adjudicator to allow them to stay in Canada saying she feared for her 60-year-old husband's life after friends like actors David Carradine and Heath Ledger were "murdered" under mysterious circumstances by "Hollywood Star Whackers."

She was later granted residency in the country after it was determined her father was born in Canada. She received her Canadian citizenship card in Feb.

Immigration officers removed admissibility proceedings against Randy after Evi said she would sponsor him so he could stay in Canada.

Randy and Evi Quaid have kept busy during his short time in Vancouver. In April, the duo debuted a bizarre docu-drama, Star Whackers, in which Randy plays multiple roles, recites Shakespeare -- and appears fully nude.