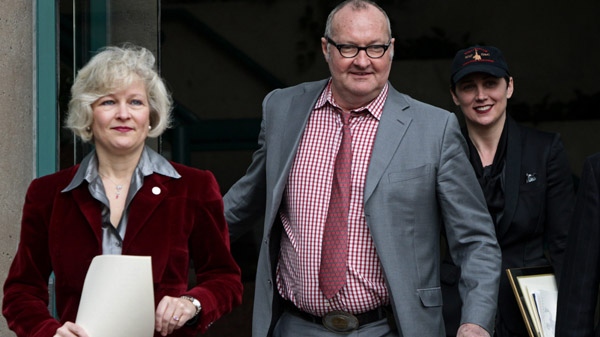 Oscar-nominated actor Randy Quaid may be running from Hollywood "Star Whackers," but that hasn't stopped him from writing a song about them.

The actor -- and now Canadian refugee claimant -- is expected to debut his new song, the aptly named "Star Whackers," on stage tonight at Vancouver's Commodore Ballroom.

It is believed Quaid will perform as he emcees a concert by local Celtic Band "The Town Pants."

Newly minted Canadian citizen Evi Quaid is sponsoring her husband to stay in the country.

The couple made worldwide headlines after fleeing to British Columbia in October to evade alleged "Hollywood Star Whackers" they said had killed many of their friends, including Heath Ledger and David Carradine.

The Quaids are both wanted under $500,000 bench warrants in Santa Barbara, California.

They are wanted there for a felony vandalism case in which they're accused of causing more than $5,000 damage to a home they once owned.

Tickets for tonight's show are for sale through Ticketmaster for $25.

Reporters from ctvbc.ca will be at the show this evening. Check back to our website tomorrow for a full review with photos.