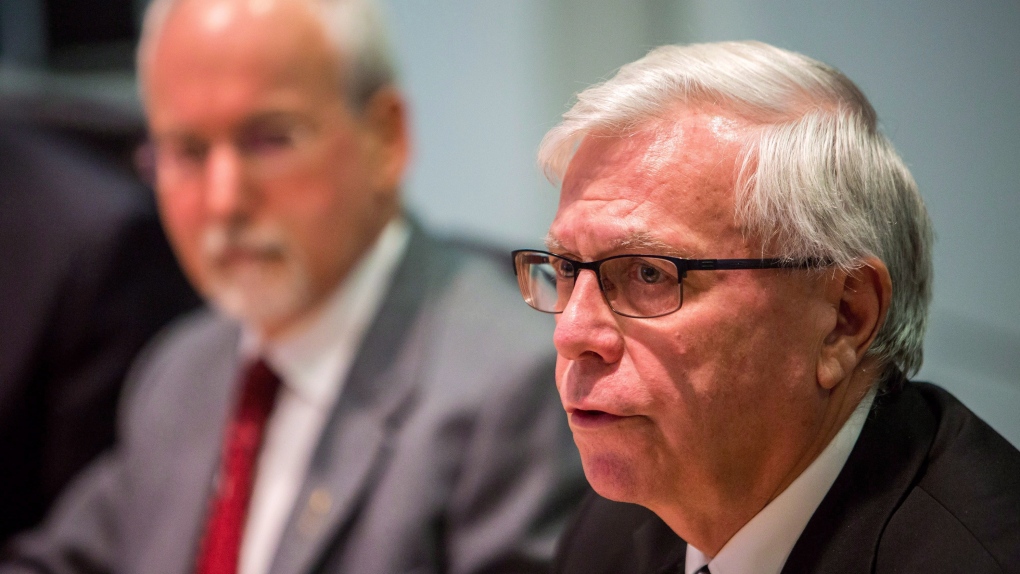 A surprise disclosure temporarily delayed proceedings at the B.C. Supreme Court trial of the former clerk of the legislature Thursday, while a key witness shed light on the controversial purchase of a wood splitter “for emergencies” that was stored at the clerk's home.

Craig James is accused of misspending public money for personal gain and has pleaded not guilty to two counts of fraud over $5,000 and three counts of breach of trust by a public officer.

“I know that these documents have come as a surprise to the defence,” Butcher acknowledged.

One document is “potentially, significantly exculpatory,” he added, meaning it could be helpful to James's defence.

The trial is unfolding more than three years after James was escorted from the legislature in November 2018 amid an RCMP investigation into the allegations.

Butcher, a special prosecutor, says the case hangs on three main areas: a $258,000 retirement allowance; the purchase of a trailer and wood splitter intended for emergencies at the legislature but stored at James's house; and travel expenses including for personal souvenirs.

In a rare occurrence, the current sitting clerk of the legislative assembly, Kate Ryan-Lloyd, has given testimony in court since Wednesday.

Details of what is in the new documents were not disclosed in court. However, Butcher said one of the documents would help Ryan-Lloyd in her expected testimony about the retirement benefit.

Defence lawyer Gavin Cameron initially argued against allowing prosecutors to question Ryan-Lloyd directly about the documents, claiming he was “shadow boxing” without knowing how the Crown intended to use the information.

The court adjourned while an RCMP officer interviewed Ryan-Lloyd about the documents before proceedings resumed with her testimony.

Ryan-Lloyd told the court that although she signed off on the purchase of a $3,200 wood splitter and $10,000 trailer as part of a $65,000 project to prepare the legislature for emergencies like earthquakes, she did not realize the scale of the purchases because they were not itemized.

It was only in the spring of 2018, when then-Speaker Darryl Plecas approached Ryan-Lloyd with concerns about James's spending that the issue came to her attention, she said.

“Mr. Plecas asked me not to speak to Mr. James about this concern,” Ryan-Lloyd said.

Ryan-Lloyd became James's deputy in 2011 when he became clerk. She assumed his role when he was placed on administrative leave and was appointed to the position permanently in 2020.

Weeks after James was escorted from the legislature, Plecas published a report outlining allegations of misspending in January 2019.

Ryan-Lloyd testified that although there was no specific policy outlining the purchase of heavy equipment, there was an expectation that any business purchases be used for business.

“I cannot think of any policy that would enable heavy equipment such as these items, which I later learned were substantive both in cost and size. They even required their own licence plates as they were insured vehicles, I understood,” she said.

There was also no policy that would allow for storage off site when they were intended for use in natural disasters and other emergencies.

“It did not make any sense to me at all,” she said.

When she looked into the matter further, she said, she learned that the trailer wasn't compatible with any of the three vehicles at the legislature that would be available for such a use.

None of them had an appropriate hitch to tow the trailer,” Ryan-Lloyd said.

“There were many questions that surfaced in the fullness of time but clearly in October of 2017, I needed to ask more questions,” she said, referring to the meeting where she signed off on the expense.

This report by The Canadian Press was first published Jan. 27, 2022.

The actions -- or more notably, the inaction -- of a school district police chief and other law enforcement officers has become the centre of the investigation into this week's shocking school shooting in Uvalde, Texas.

A scientific analysis commissioned by the FBI shortly before agents went digging for buried treasure suggested that a huge quantity of gold could be below the surface, according to newly released government documents and photos that deepen the mystery of the 2018 excavation in remote western Pennsylvania.

Indiana police disclose cause of death of young boy found in a suitcase. They are still trying to identify him

An unidentified child who was found dead in a suitcase last month in southern Indiana died from electrolyte imbalance, officials said Friday.