For the first time since British Columbia transitioned to weekly reporting of COVID-19 data, the number of people in hospital with the disease has declined.

As of Thursday, there were 550 test-positive patients in hospital, down from 570 at this time last week. Among those in hospital were 39 people in critical care, down from 47 last Thursday. 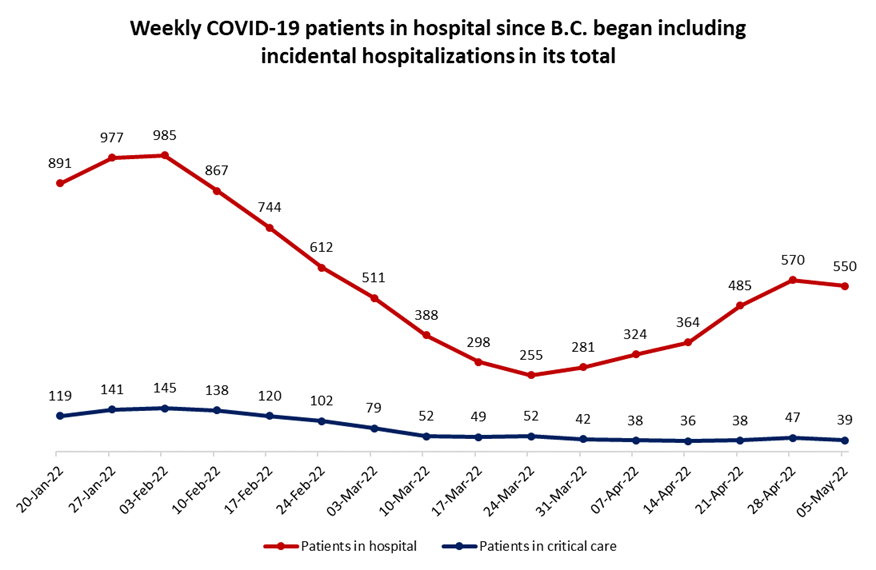 This graph shows the number of COVID-19-positive patients in hospital in B.C., on Thursdays, since the province switched to a "hospital census" model in January. (CTV)

B.C.'s COVID-19 hospitalization data includes both those with serious illness requiring hospitalization and those who are in hospital for other reasons and test positive for the coronavirus during routine screening.

Since the province switched to this "hospital census" model in January, there have been as many as 985 patients in hospital on a Thursday and as few as 255.

While the decline in hospitalizations may indicate that the pandemic's sixth wave has peaked in B.C., other data released Thursday was a mixed bag.

New lab-confirmed cases of COVID-19 were up slightly compared to the previous week, with 2,283 recorded for the week of April 24 to 30, compared to 2,269 for the preceding period.

Those figures include only "lab-confirmed, lab-probable and epi-linked" cases, according to the B.C. Centre for Disease Control. Because most people with symptoms in B.C. are not eligible for a lab-based PCR test and the BCCDC does not collect data on positive rapid antigen tests, there is no way to know the true number of new infections in B.C. during the week in question.

Still, new lab-confirmed infections are not yet declining, which they would be expected to do if overall transmission in the province was low.

Similarly, though the number of patients in hospital is lower this week than last, the number of reported new hospitalizations for the week of April 24 to 30 continued an upward trend.

Last Thursday, the BCCDC reported that there had been 355 new hospitalizations during the most recent epidemiological week (April 17 to 23). That number was revised upward to 418 in this week's data release.

The current week's report, covering April 24 to 30, indicates 375 new hospitalizations. That figure is higher than last week's starting point, and is also expected to grow "as data become more complete" according to the BCCDC.

Deaths have also continued to trend upward. Last Thursday's starting point was 42 new deaths for the week of April 17 to 23, a figure that has been revised up to 66 in this week's report.

This week, the starting point for the week of April 24 to 30 is 50 deaths, a figure that is expected to grow.

It should be noted that the province switched to reporting "30-day all-cause mortality" in early April. This means rather than attempting to sort out deaths caused by COVID-19 from deaths in which the deceased was COVID-positive but did not die from the disease, the BCCDC simply reports all deaths that happen within 30 days of a positive test, regardless of the cause of death.

"All-cause mortality is being used because cause of death takes approximately eight weeks to be recorded," the BCCDC says in its weekly reports on COVID-19 numbers.

"Retrospective evaluations of underlying cause of death will be done by the BCCDC, in addition to the data provided in this report, to better understand true COVID-19 mortality."

Another indicator that has helped quantify the rise of the pandemic's sixth wave in B.C. has been wastewater surveillance in the Lower Mainland.

For the last several weeks, all but one of the five monitoring stations have seen sustained increases in coronavirus concentration in wastewater.

On Thursday, however, the latest "situation report" from the BCCDC shows less consensus across wastewater plants.

The Northwest Langley facility has now seen an increasing trend for the last six weeks, but the Annacis Island and Lions Gate plants now show a decreasing trend.

The BCCDC describes the trend at Iona Island as "stable," while the Lulu Island plant has seen an increasing trend, but only for the last week.

As they lifted nearly all of the remaining public health orders related to COVID-19 in March and April, B.C. health officials predicted an increase in coronavirus transmission as a result, but stressed that high levels of vaccination and antibodies from recent infection meant the disease would not overwhelm the health-care system.

The vast majority of those doses were boosters - either third or fourth doses. Just 2,172 were new first doses and 3,927 were second shots.

Age-standardized data available on the BCCDC's COVID-19 Surveillance Dashboard shows those who have received a booster becoming hospitalized with COVID-19 at a much lower rate than those who are unvaccinated or have received just two shots.