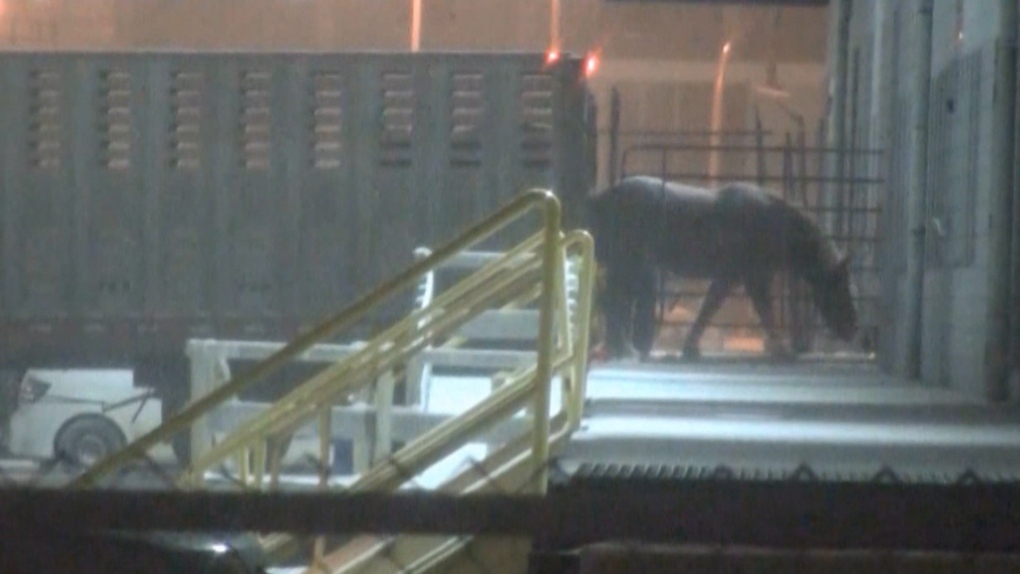 VANCOUVER -- An animal welfare group is considering an appeal after a federal court judge denied their request to order government food inspectors to follow the laws regarding shipping live horses overseas to be slaughtered for meat.

"This is not a case where the minister or the (Canadian Food Inspection Agency) has turned their back on their duties; nor one where they have demonstrated negligence or bad faith," Boswell's decision says.

In October, the coalition had argued at a hearing the Health of Animals Act regulations were not being followed when it comes to segregating larger horses during shipping by air (over 14 hands in height), and ensuring the animals are able to stand in their "natural" positions without coming into contact with a deck or roof.

Boswell found the obligations imposed by the laws "fall upon the owners and those in charge of the crates and containers," not the CFIA.

"Although the parties disagree about the proper treatment of horses in transit by air, I do not see the CFIA's difficulties in consistently enforcing (the regulations) as being unlawful. If anything, more clarity is required on the best way to manage horses shipped by air, but this does not amount to an unlawful act in my view," Boswell wrote.

"We think that the judge incorrectly interpreted the law," Breder said.

"The law in this case is very clear, that veterinary inspectors who are essentially government employees, they are CFIA employees, they must inspect every single shipment that goes out of Canada by air and they must certify that all shipments are in compliance with the law."

Breder said no one else oversees that part of the horse's journey. She added her clients are also concerned the court stated the law has not been consistently applied, and the message that could send to others in the animal industry.

In an email to CTV, the Canadian Food Inspection Agency wrote: "It was determined that the CFIA is engaged in the protection of animal welfare during export and is reasonably exercising its discretion in the enforcement of the Health of Animals Act and Regulations."

The agency also noted the coalition has until Jan. 4, 2020, to appeal the decision.

Breder said it is something her clients are seriously considering.

"Quite frankly, we do think the CFIA has turned its back on its duty, and quite blatantly so, by certifying shipments of horses as being in compliance with the law when clearly they're not," Breder said.

"Ultimately it means that horses are going to continue to suffer when they're being shipped in conditions that are, what we say, are inhumane."

In court documents, the CFIA has said inspectors are currently operating on an interim policy, which was implemented in August 2017, which allows for compatible animals to be kept together during shipping, and does not consider overhead netting used on the crates as being the same as a roof. The amendments will officially come into effect on Feb. 20, 2020, and replace the current rules with regards to segregation based on size, and space requirements.

The coalition has said shipments of horses from airports in Edmonton, Calgary, and Winnipeg that they've witnessed over the past seven years are primarily destined for Japan and South Korea, where the meat is considered a delicacy.

The group wants to see the industry stopped all together.

According to information from Agriculture Canada, there were 1,395 horses exported for slaughter as of June of this year. Last year, there were 3,396 sent overseas. In 2017, there were 4,846.