5 people died of COVID-19 in B.C. this weekend, including one in their 20s 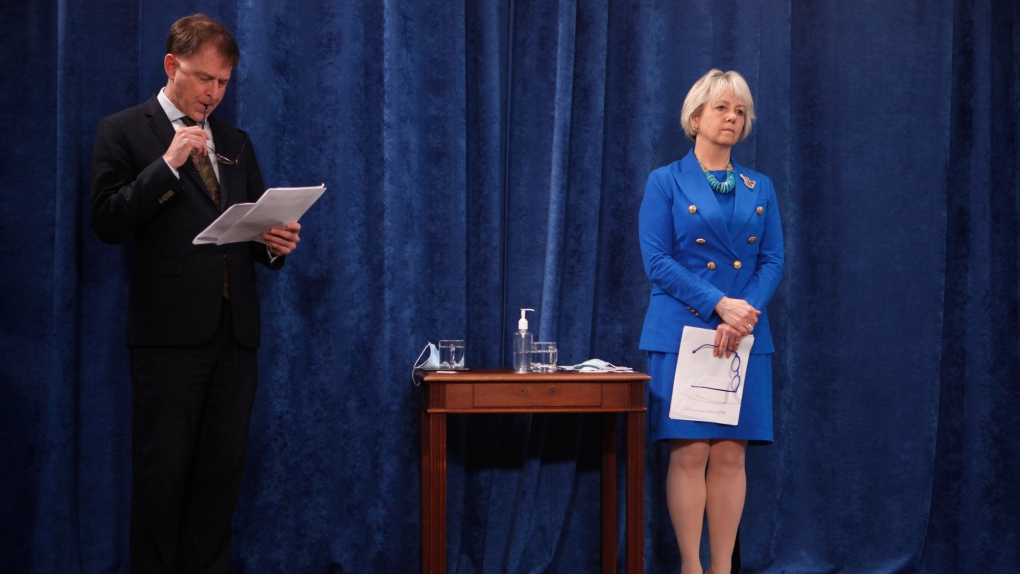 Provincial Health Officer Dr. Bonnie Henry and health Minister Adrian Dix look on as Premier John Horgan talks about B.C.'s plan to restart the province during a press conference at Legislature in Victoria, Tuesday, May 25, 2021. THE CANADIAN PRESS/Chad Hipolito
Vancouver -

A young adult is among those who died of COVID-19 in B.C. over the weekend, health officials said in their first update of the week.

Speaking at a news conference in Victoria, the province's top doctor said five people died during the three-day period, including a person in their 20s.

Dr. Bonnie Henry said Monday that this person was located in the Interior Health Authority, but that she did not have any further details about them.

The others who died were in their 60s and 70s, Henry said. The death toll of the pandemic has reached 1,754 in B.C., the provincial health officer said, expressing her condolences to all impacted.

Also announced Monday was that another 145 cases of the novel coronavirus were recorded over the weekend, the majority of which were in the province's Vancouver Coastal and Fraser health regions.

Henry said there were 57 infections identified between Friday and Saturday, 50 between Saturday and Sunday, and just 38 between Sunday and Monday's update.

The latest numbers bring the province's rolling seven-day average down to 62 cases per day, the lowest it's been since Aug. 14, when the daily average was at 61.

Monday also marked the first time active cases have been below 1,000 since Aug. 28.

At that time, there were 974 cases considered active. As of Monday, there were 930. Henry said 107 of those people are seeking treatment in hospital, with 37 in critical or intensive care units.

During the news conference, Henry said modelling data suggests the total number of infections would have been much higher, were it not for B.C.'s immunization program.

The data she presented Monday suggested a single dose effectively prevented 70 per cent of infections in adults between the ages of 50 and 69. Read more on the modelling part of the presentation.

Last week, more than 427,000 doses of vaccine were given out across the province – the highest weekly total yet in B.,C.'s battle against COVID-19.

Henry said the latest numbers mean 78.1 per cent of all adults in B.C. have received at least one dose. Factoring in those aged 12 and up, 76.8 of all eligible have been given at least one shot.

She acknowledged there were some heat-related issues over the weekend, which left some waiting in line for hours in temperatures in the high 30s to low 40s, and resulted in some clinics changing location last minute. Still, she said, 95 per cent of people with appointments did get their shots.

The NHL record for most consecutive games played stood since 1987, but that record has now been tied, as Philadelphia Flyers defenceman Keith Yandle skated in his 964th consecutive game Monday night when the Flyers hosted the Dallas Stars.