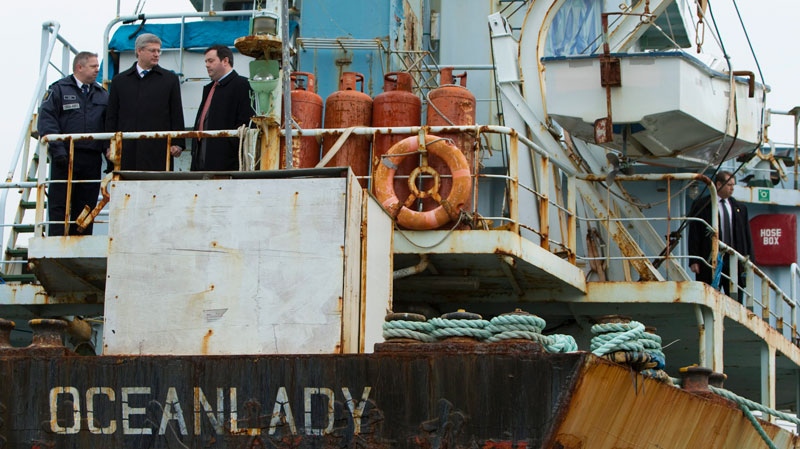 Mounties have arrested four men they say are responsible for illegally smuggling dozens of Tamil migrants onto a freighter bound for B.C. two years ago.

The men were arrested on Tuesday and are all charged with organizing illegal entry into Canada, RCMP Supt. Tom Jones told reporters at a press conference.

"They were some of the lead organizers on the vessel," he said.

All of the accused men are Sri Lankan nationals who arrived in B.C. onboard the MV Ocean Lady in October 2009 as part of a group of 76 asylum-seekers. The men are now living in the Toronto area and are seeking refugee status in Canada.

All of the migrants onboard the Ocean Lady were ordered released from detention pending the outcome of their refugee claims, and almost all have now settled near Toronto. The migrants claim they were fleeing persecution after the bloody close of Sri Lanka's 26-year civil war.

Canadian border officials say that the accused men's refugee claims remain active while their cases are before the courts, but a conviction could render them ineligible for refugee status.

The men could face a maximum sentence of life in prison and a $1 million fine if they are convicted.

One man who arrived onboard the Ocean Lady told CTV News that he paid smugglers $44,000 to get out of Sri Lanka. He said the voyage was terrifying, and he was afraid he might not make it to Canada alive.

The Ocean Lady was followed less than a year later by the MV Sun Sea, which brought 492 Tamil asylum-seekers to B.C.'s shores last August. The federal government has accused more than 30 passengers of having links to terrorism, war crimes or human smuggling.

An investigation into human smuggling allegations connected to the Sun Sea is ongoing.

In response to rumours that more migrant ships could be on the way soon, the Conservatives nominated former CSIS director Ward Elcock as a special envoy on human smuggling.

The Tories have also drafted legislation they say will prevent large-scale smuggling operations like the two migrant ships, including mandatory sentences for human smugglers and mandatory detention for migrants.

Immigration Minister Jason Kenney told reporters Tuesday that the charges in connection with the Ocean Lady demonstrate the necessity of those changes to the law.

"Coming through a smuggling operation is the worst and most dangerous way of coming to Canada. These large-scale operations fundamentally undermine public confidence in the fairness of our immigration and refugee system," he said.