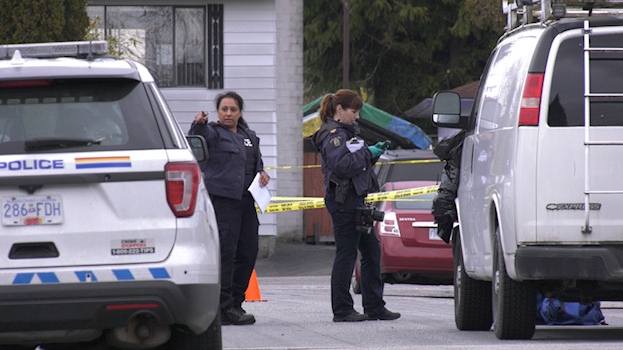 A man has died following a shooting in Surrey early Tuesday, April 7, 2020.

VANCOUVER -- A 26-year-old man has been charged with second-degree murder in connection to a shooting that homicide investigators now say they believe was random.

On April 7, 21-year-old Pritpal Singh was shot and killed in Surrey at about 12:45 a.m. On Tuesday, homicide investigators said Robert Tomljenovic was charged with second-degree murder and robbery with a firearm in connection to Singh's death.

Tomljenovic will appear in court on April 17.

"Investigators and our partners from the Surrey RCMP worked relentlessly around the clock since day one to advance the investigation of Pritpal’s murder," said Sgt. Frank Jang with the Integrated Homicide Investigation Team in a news release.

"It is incredibly satisfying to witness the sacrifices and good old-fashioned police work on the part of our investigators culminating in charge approval."

At first, homicide investigators believed the shooting was targeted. They now say it's not believed the two men knew each other and it appears it was a random incident.

"The work is not yet done, however, as our file co-ordination team will be busy compiling final disclosure packages for court," Jang said.

On the morning of the shooting, which happened near Bear Creek Park, neighbours told CTV News they heard the sound of two gunshots ring out. Another resident said she heard screaming immediately after.

When police arrived at the scene, Singh had already died.

Crystal Marcoux was home with her kids when she heard gunshots and looked outside. She says she saw a four-door vehicle speeding away.

"My kids were literally just playing outside here yesterday afternoon and riding their bikes and scooters down the alley here. To know that happened three doors up from our house is a little nerve-wracking when you have kids," Marcoux said. "It's a very quiet neighborhood, that's why we moved here."

IHIT says further details won't be released while the matter is before the court.